Energy use emerging as the biggest challenge that planners must come to grips with as urbanisation races ahead.

As urbanisation gathers pace, cities across the world need to look at ways to meet the growing needs of the populace for infrastructure and energy, and at ways to keep pollution to manageable levels in order to have sustainable cities. 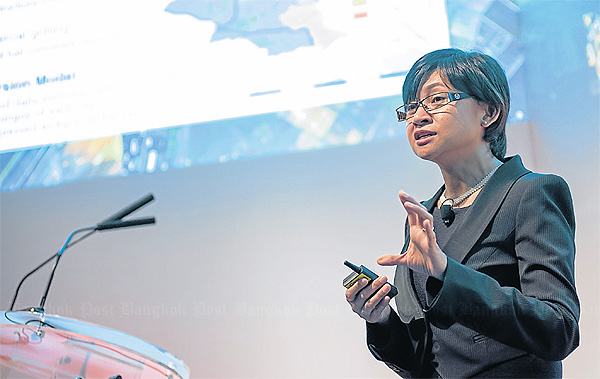 “The quality of the livelihood of the people is paramount,” says Glynda Bathan-Baterina, deputy executive director of Clean Air Asia.

The challenges were brought into sharp focus at the recent World Cities Summit in Singapore, attended by thousands of participants including mayors of some of the world’s megacities.

“The quality of the livelihood of the people is paramount and one would be astonished to know that seven out of 10 cities in Asia have poor air quality,” said Glynda Bathan-Baterina, the deputy executive director of Clean Air Asia, a decade-old organisation set up with the help of the Asian Development Bank, the World Bank and USAid.

The bulk of the 309 cities surveyed by Clean Air Asia had air quality three times worse than the maximum recommended standards of the World Health Organization (WHO), she said.

Pollution causes more than 7 million deaths from related diseases worldwide each year and about 2.6 million of those deaths are in Asia. This in turn, she said, was increasing the cost of healthcare. A related study showed that healthcare costs were $880 million in Shanghai, $393 million in Manila and $424 million in Bangkok.

The lesson to be drawn from these studies, she added, that as urbanization continues, it is necessary to plan things out well in advance in order to control pollution.

Ms Bathan-Baterina’s statements were echoed by others such as Jefferson Edwards, the general manager for global LNG & gas development for Royal Dutch Shell Plc. He said that the company’s recent study indicated that by 2050 the world’s population will have risen to about 9 billion from 7 billion currently, and 70% of these people would be living in urbanised areas.

Out of this new populace, about 44% would be in Southeast Asia, and by 2030 China alone will add more than 350 million people to its urban population, which is already about the size of the United States, he said.

A major problem facing cities stems from the inefficient use of energy sources. A study by Booz & Company along with Shell of 500 cities concluded that cities need to start thinking about their future use of energy well ahead of major developments.

The findings, published in a report titled “New Lenses on Future Cities”, shows energy use currently concentrated in two of the six city archetypes: sprawling metropolises such as Rio de Janeiro and Tokyo, and prosperous communities such as Dubai and Stockholm.

It said that these cities have relatively low density and high per capita GDP, and are typically found in the United States and Europe.

Urban powerhouses, the third archetype characterised by high population densities and high individual incomes, are also heavy energy users. But their share of global consumption is modest by comparison as few cities belong in this group (Hong Kong, Singapore and New York).

The more interesting ones are the “developing mega-hubs” such as Hyderabad (India) and Chongqing (China), and underprivileged crowded cities such as Manila and Bangalore, which are relatively light energy users today, Mr Edwards said.

While these cities have low individual incomes and medium to high populations, most of them will join the next wave of urbanisation as they become more prosperous. Their growing energy demand will shape global levels of energy use, making their development choices critical.

"Underdeveloped urban centres”, the most common archetype, account for only 11% of total energy used in the cities studied. They are low energy users.

Citing the example of Singapore, which has managed to stay ahead of the game despite the sharp rise in its population from just 1.5 million two decades ago to more than 4.5 million today, the panelists at the conference said that good urban planning was needed to keep up with the pace of urbanisation that is transforming the region.