The Bank of Thailand's Monetary Policy Committee (MPC) is likely to maintain its 2% policy rate at Wednesday's meeting now that the military takeover has brightened the country's prospects, economists say. 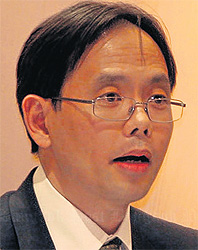 Kampon Adireksombat, head of the Tisco Securities economic strategy unit, said the MPC will probably keep the benchmark rate steady because political uncertainties have eased and the central bank would prefer the junta's fiscal policy work its own effect on stimulating economic growth.

Rising inflationary pressure is another contributing factor, since a move to fix the prices of commodities and liquefied petroleum gas is expected in the short term.

The consumer price index continued its upward trend last month to reach a 14-month high. Headline inflation was 2.62% in May versus 2.45% the previous month, driven by higher food and energy prices.

Despite looming inflation, Tisco Securities expects the MPC to stand pat throughout 2014 before raising rates some time next year.

Mr Kampon said the committee is likely to wait for further developments such as a rate rise by the US Federal Reserve or stronger domestic growth before raising its own policy rate.

Santitarn Sathirathai, head of Southeast Asia and India research at Credit Suisse, predicts an unchanged policy rate at Wednesday's meeting but remains open to the possibility of a rate cut later this year.

"While the worst in terms of growth is probably behind us, full economic recovery will take time, given that weakness in the economy was not just about political instability but also high household debt, weak farm prices and lacklustre export growth," Mr Santitarn said.

He expects GDP and export growth to guide the central bank's decision-making, in addition to tourism, consumption and investment.

Charl Kengchon, managing director of Kasikorn Research Center, echoed the other analysts, saying the MPC needs time to assess the momentum of the economic recovery before it starts to raise rates. He sees an unchanged policy through the end of 2014.

Amonthep Chawla, head of research at CIMB Thai Bank, said the committee does not need to adopt a looser monetary policy, given that a fiscal policy based on rapid budget disbursement is being carried out by the junta.

Maintaining a low policy rate amid rising inflationary pressure would result in a negative real interest rate, he said, which might encourage speculation in risky assets.

Since the Federal Reserve is likely to completely halt its monetary stimulus scheme by year-end, regional central banks are expected to increase their interest rates accordingly to safeguard against fund-flow volatility, making it inappropriate for the Bank of Thailand to lower its benchmark rate further.

The central bank could either maintain its 2% policy rate until year-end if the economic outlook remains murky or raise the rate in the case of a strong recovery, Mr Amonthep said.