Land sales in industrial estates are expected to recover in the second half of this year after the Board of Investment (BoI) last week made great strides in approving applications for major projects which had been pent up almost for nine months. 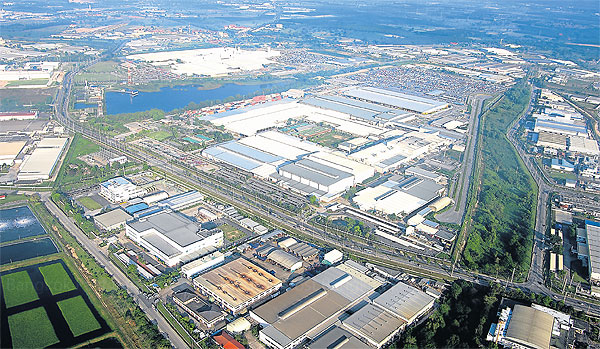 An aerial view of one of Hemaraj’s two industrial estates in Rayong province.

Although the approval by the BoI may not boost industrial land sales overnight, it will boost confidence among foreign investors.

“It is a good sign after the BoI’s main board approved large-scale projects but recovery momentum will be significantly gained next year.”

The BoI, chaired by junta chief Gen Prayuth Chan-ocha, last Wednesday approved 18 projects worth a combined 123 billion baht. Most of them are in the automobile and auto-parts manufacturing industry.

“The National Council for Peace and Order has restored investors' confidence after it announced its economic policies and pushed up many projects that were pent up during the political crisis,” he added.

During the sluggish period, industrial estate developers needed to sustain business with sales promotions and slowed investment in new land development, as customers who were not confident about the political and economic situation delayed their decisions.

“When one of the country’s largest car makers delayed investment in a new factory for another six to 12 months, other vendors and manufacturers that supported its business needed to slow down as well,” Mr Thavich said.

The industrial estate market is expected to pick up again in the second half. Last year, industrial land sales were estimated at 5,000 rai.

In the first half, Hi-Tech froze new land development in its industrial estate in Ayutthaya but plans to launch 100 rai of land in the second half with the aim of closing sales within one year.

From January-May, the company sold 50 rai in Prachin Buri province, where it has 1,100 rai of land, said Mr Thavich.

“The market has been slower, hit by political disruptions as well as lower overall demand, a depressed automobile sector and exports up only slightly,” he said. "However, activity has now returned to a more normal level.”

The delay in BoI approvals affected developers, as many investors had not been able to finalise their plans even though they intended to invest further.

Hemaraj reported land sales of 100 rai in the first quarter but maintains target sales of 1,600 rai in 2014.

“With the BoI now in place, the environment has improved,” said Mr Nardone. “We will benefit in from the recovery in all industries across our estates.”

The slowdown began last October as many BoI applications were held up. However, the 18 big projects approved last week will trigger many industrial estate developers to revise their business plans in the second half.

Knight Frank has at least five deals with combined investment of 4.3 billion baht waiting for confidence recovery. Most of them are in the automobile and auto-parts sector. One is an aviation training centre.

Meanwhile, half the deals over the past 12 months involved investment expansion, 25% were those buying at bargain prices for future expansion, and only 25% were new entrants.

“Since the coup, at least 10 requirements have resumed from big investors,” said Mr Nivat.

He said recovery this time might be short-lived, as investor confidence will depend largely on a new cabinet scheduled to be set up in September.

“Thailand should not lose its attractiveness, as there are huge opportunities ahead,” Mr Nivat said.

“Google and Amazon are studying four markets — Thailand, Hong Kong, Malaysia and India — to invest in a logistics centre. They will estimate domestic IT spending and online purchasing behaviour as well as the investment atmosphere."

Amazon is looking for a warehouse with a usable area of 40,000 square metres for an investment of 2 billion baht.

In Thailand, online retail website Lazada.com is looking for an additional 10,000 sq m to rent after renting a warehouse sized 5,000 sq m in the Theparak area.

“During the political crisis, some foreign investors moved to other countries. If Thailand returns to normal, they will definitely come back,” Mr Nivat said.

Surachet Kongcheep, associate director at property consultant Colliers International Thailand, said the industrial estate sector should improve in the second half, but it also depended on the pace of project approval.

“The government should send someone to build confidence and foster better understanding among foreign investors,” he suggested. “Many industrial estate developers are difficult to sell [to foreign investors], as they do not understand Thailand.”

Mr Surachet said the junta’s plan to develop some border provinces as special economic zones would benefit the industrial sector.

Places close to Myanmar and Cambodia such as Chiang Khong, Mae Sai and Sa Kaeo will benefit the most due to huge demand across the borders. The biggest potential is in industries that depend on labour and consumer products to feed strong demand.

“Manufacturing is immune to political problems in Bangkok. During the political crisis in 2010, manufacturing faced no interruptions. But this year the industry was affected, as the failure to approve large-scale projects damaged the industry and sapped confidence," he said.

Sales of serviced industrial land plots decreased from 1,345 rai in last year's fourth quarter to 209 rai in this year's first quarter — a decrease of 84.5% quarter-on-quarter and 70.5% year-on-year. 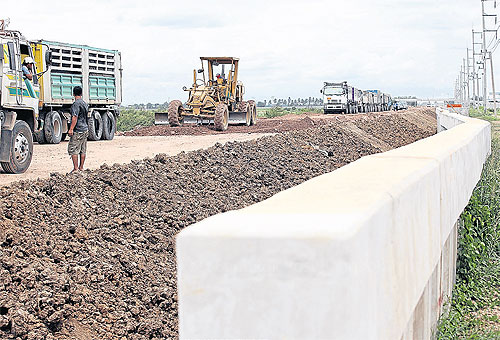 A flood prevention project alongside Rojana Industrial Park in Ayutthaya. 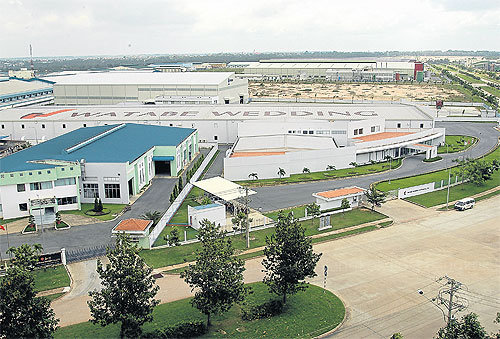 Amata and other industrial estate developers will revise second-half plans.