Thailand’s shrimp and tuna processors and exporters are challenging non-governmental agencies and importers worldwide to come here and learn the truth about labour conditions in the fishing industry. 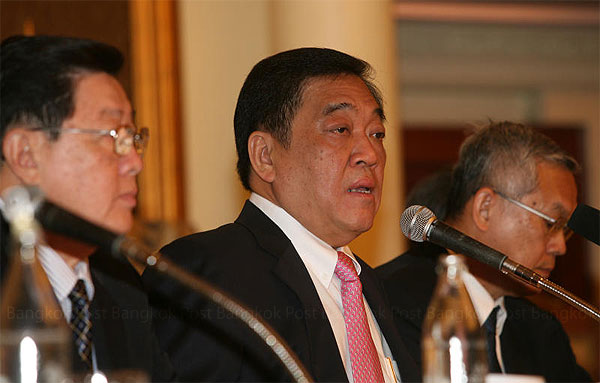 The challenge was made after the US this week downgraded Thailand to Tier 3, the lowest level, in its 2014 "Trafficking in Persons" (TIP) report following reports by civic groups and foreign media alleging the use of forced labour and slavery in the seafood industry.

"We have been improving working conditions in the industry for eight years and are sure there has been no child or forced labour in the production chain," said Poj Aramwattananont, president of Thai Fishery Producers Coalition, which comprises eight associations.

Most shrimp is farmed, while all raw materials to make canned tuna are sourced from the US, Europe, Japan, South Korea and Taiwan.

The Commerce Ministry is also countering the allegations with a plan to lead a delegation to the US next month to clarify working conditions in the seafood industry to officials and consumer groups.

The Foreign Ministry will also prepare reports to explain the issue within the next three months before any sanctions are imposed by the US.

The private sector will also present evidence to the National Fisheries Institute in the US about how Thailand's operations comply with rules laid down by the International Labour Organisation.

The US is a key export destination, buying 22% or 22 billion baht of Thailand’s tuna exports. It is also expected to import about 38% of the 200,000 tonnes of shrimp Thailand plans to ship to other countries this year.

Chanintr Chalisarapong, president of the Thai Tuna Industry Association, said Thai tuna was sold to almost every country in the world, so the US allegations would not slow exports.

About 80% of workers in tuna plants are from Myanmar, and the factories document using legal labourers, he said.

Somsak Paneetatyasai, president of the Thai Shrimp Association, said Washington had yet to impose any trade sanctions, but Thai shrimp products have been affected after London-based newspaper The Guardian accused the Thai fishing industry of using foreign labourers as slaves.

"It resulted in a move from Carrefour to review the purchase of Thai shrimp," said Mr Somsak.

Meanwhile, three sugar associations said Thailand’s recent downgrade for human trafficking in the TIP report would not directly affect the sugar sector, as it was not included in the list.

But the Thai sugar industry is listed as Tier 2 by the US Labor Department as among countries whose governments do not fully comply with the Trafficking Victims Protection Act’s minimum standards.

“The associations realise how the problem has brought about misunderstanding about the sugar and sugar cane industry," said Siriwut Siempakdi, head of public relations for the associations.

"As a result, we're already collaborating with the Office of the Cane and Sugar Board of Thailand to clarify the issue through the Commerce Ministry’s Foreign Trade Department.”

The associations have also joined hands with relevant agencies to inspect sugar millers nationwide to make sure there is no use of child labour so that it can report the situation to countries that have expressed concern about the issue.