The Customs Department's working committee will ask newly appointed director-general Somchai Sujjapongse to raise the duty-free limit on new personal items bought abroad from 10,000 at present, said a source at the department.

The proposed new limit is in the range of 80,000 to 100,000 baht, the source said, adding that the current duty-free limit is too low and not in line with economic circumstances. 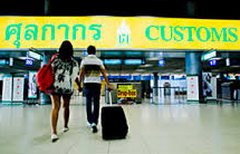 The trip to the Customs line may be a little less stressful soon, if the Customs Department amendments pass.

The 10,000-baht import duty-free restriction has been in place for several decades and is not in accordance with the increased income of Thais and foreigners.

The Customs Department recently raised the limit on the amount of money each traveller can take out of the country to 500,000 baht from 50,000 baht previously to comply with the growing value of cross-border trade.

The Customs Department this week caused panic among both passengers and airline crews by posting signs announcing the enforcement of the limit at Suvarnabhumi airport, saying if personal goods including new clothes, shoes and bags in non-commercial form exceeding the 10,000-baht limit are brought into Thailand, they must be declared to customs officials and the duty paid before their baggage goes through the X-ray machine.

Any undeclared items will be seized, and owners may have to pay up to four times the value of the item plus duty.

Gifts prepared to give to other people, donated items, collectable items, second-hand goods, empty watch and brand name boxes and bags are not considered personal items. Individuals bringing in these products have to inform customs officials before the baggage X-ray.

Expensive new watches or bags worth more than 10,000 baht will be liable to duty even if they are being worn. However, the displayed signs were removed shortly after the issue became the talk of the town.

The source said the potential increase in the duty-free restriction is to facilitate travellers, but the department will continue stringent inspections of those suspected of bringing in goods for commercial purposes.

Mr Somchai said the department must carefully study whether the increase in the duty-free restriction would encourage the import of luxury products.

Even though the warning signs placed at Suvarnabhumi have been removed, customs officials will continue random inspections, he said.

"Officials will crack down on those who bring in goods for commercial purposes. Officials who act as accomplices will also be dealt with," he said.

For example, the department will amend the law to allow courts to use their discretion to fine operators failing to declare goods up to four times the value of the items to help those who did not deliberately underestimate the goods' value to avoid paying tax. At present, those failing to declare goods are subject to a fine equal to four times the value of the goods.