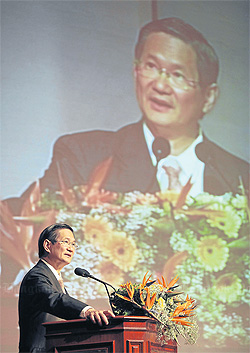 Bangkok Bank president Chartsiri Sophonpanich addresses a recent seminar sponsored by the bank in Yangon. Thailand’s largest bank has had a presence in Myanmar for 20 years, he noted.

The central bank announced earlier this year that it would issue licences to five to 10 foreign banks. It has prepared a list of 25 potential entrants comprising four Thai banks, three each from Singapore, South Korea, Taiwan, Malaysia and Japan, and one each from China, France, Australia, Mauritius, India and Vietnam.

The four largest Thai banks by assets — Bangkok Bank, Krungthai Bank, Siam Commercial Bank and Kasikornbank — already have representative offices in Myanmar. Thailand is the second-largest trade partner of Myanmar after China, and an increasing number of Thai businesses are in talks with the Myanmar Investment Commission about new ventures.

“Thai banks are interested in investing in Myanmar because when the Asean Economic Community (AEC) begins late next year, many Thai businesses and goods will arrive in Myanmar, including via border stations. There seems to be good potential for Thai banks to invest here,” said U Myat Thin Aung, vice-chairman of Yoma Bank.

The AEC is intended to allow a freer flow of goods, technologies, investment and labour among Asean member countries. Tariffs will be eliminated on more goods, but developing countries such as Myanmar, Cambodia, Laos and Vietnam will be given an extension until 2018 as their industries are less prepared for foreign competition.

The central bank is limiting the number of foreign bank branches that can open. As well, they will be limited to corporate banking activities.

“Foreign banks will compete on interest rates with Myanmar banks, drawing local investors and borrowers. And if Thai banks bring foreign investors here, they will likely do business only with foreign banks in Myanmar,” said U Myat Thin Aung.

He said prevailing interest rates at local banks were above 10%, while foreign banks charged less than 5% for loans. Myanmar Foreign Trade Bank loans are also increasing compared to those at other foreign banks.

“Other foreign banks besides Thai ones will offer loans with lower interest rates to their citizens, and if local banks don’t follow suit and cut their rates, foreign banks will have some local customers too. But the Central Bank of Myanmar will monitor the situation to ensure local banks do not lose their customers,” he said.

“Money transfers across borders are another example where, if foreign banks have faster services, they will gain more customers. After the AEC, local bankers will ask for more opportunities from the government to compete for foreign investors.”

Bangkok Bank, Thailand’s largest bank by assets, is eager to jump into the Myanmar market even before receiving a licence, bringing investors from around Asia there for trade and investment meetings with local businesspeople. The bank held a seminar in Yangon from July 17 to 19 that allowed local people to network with investors and customers of Bangkok Bank.

The three-day seminar brought together more than 100 potential investors and customers of the bank, reinforcing its experience with 27 international branches and representative offices.

Bangkok Bank president Chartsiri Sophonpanish pointed out that the bank had had a presence in Myanmar for two decades already.

“In recognition of the untapped potential of Myanmar, where the bank opened a representative office almost 20 years ago, we are organising many activities to support the country’s economic development and help our customers understand the country’s potential, as well as develop business connections,” he said.

Since Bangkok Bank opened its representative office in Myanmar in 1994, it has provided financial assistance to Thais doing business in Myanmar.

“We hope if we are lucky enough to be selected for a foreign licence, we can connect more Thais to the business community in Myanmar,” said Chaiyarit Anuchitworawong, executive vice-president of Bangkok Bank.

“The central bank will not allow us into the retail segment, but in addition to establishing a branch and offering financing to investors, we will advise local businesspeople.”

Since the central bank announcement on issuing foreign bank licences, the 20 local Myanmar banks have expressed concern about losing market share. Mr Chaiyarit noted foreign banks had their own customers and central bank deputy governor U Sett Aung confirmed foreign banks would not be allowed into retail banking.

Among those that applied for licences, China’s ICBC has the most assets at US$239 billion, while Australia’s ANZ bank is valued at $84 billion, India’s State Bank of India $32 billion, and Singapore’s United Overseas Bank $29.7 billion.

Bangkok Bank was established in Thailand in 1944, and total assets as of March 31 this year were $75 billion. It has 1,150 domestic branches along with overseas branches and offices in 13 countries, as well as over 1,000 correspondent banks. The bank’s self-service network includes 8,500 ATMs and 1,150 deposit machines, in addition to phone banking, Bualuang mBanking and Bualuang iBanking.