Railway gangs are working to clear and repair the Bangkok Kanchanburi track after a derailment involving the prestigious international Eastern & Oriental Express on Sunday morning, the State Railway of Thailand (SRT) said on Monday. 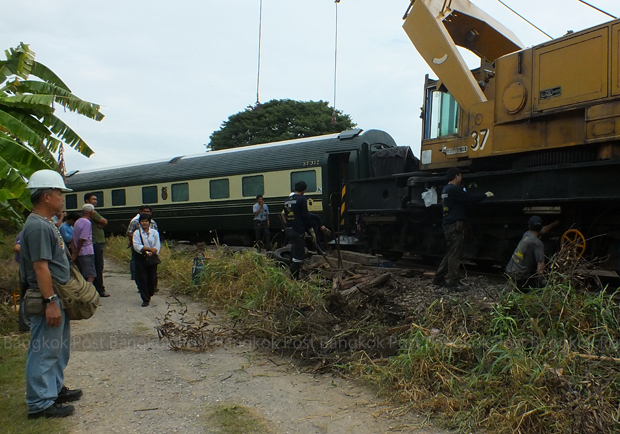 SRT work gangs move a derailed carriage from the Eastern & Oriental Express train in Ban Pong district, Kanchanaburi, on Monday. Repairs to the damaged rails that caused the accident were continuing . (Photo by Saichol Ochkajon)

SRT spokeswoman Nuananong Wongchan said the line could be reopened late on Monday at the earliest, once the derailed carriages were cleared and repairs made to the damaged track that caused the accident.

The Kanchanaburi route is popular with local and foreign tourists. The "Death Railway" between Kanchanaburi and Nam Tok stations remains open.

The line to Kanchanaburi was closed on Sunday morning after six cars containing 80 tourists on the privately operated Eastern & Oriental Express train, which travels between Singapore and Bangkok, and the locomotive engine left the track in Ban Pong district of Ratchaburi. Two Japanese passengers were injured.

Four derailed cars were put back on the track and hauled to other stations. Work gangs were moving aside the other two carriages and the locomotive to clear the track for sleeper repairs and the reopening the route, the SRT said.