The Gold Traders Association has agreed to set up a physical gold exchange, a move aimed at paving the way for the country's first-ever spot gold market and regaining the 30% of trade volume lost to Singapore and elsewhere. 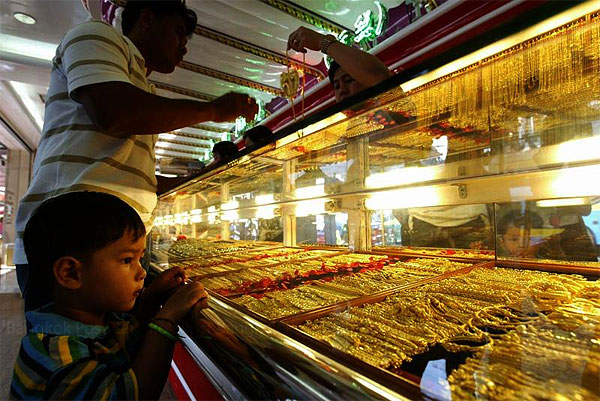 A boy looks at ornamental gold on display at a shop on Yaowarat Road in Bangkok. Gold traders have agreed to set up a spot gold market in Thailand. Phrakrit Juntawong

"But a serious talk was held today and gold traders need to work out the details with the Stock Exchange of Thailand," he said. "We hope that a draft [for setting up the exchange] is completed this year and trading can begin next year."

The SET has been in talks with gold dealers for some time to persuade them to support a physical gold market.

SET chairman Sathit Limpongpan recently said most major gold dealers had thrown their support behind the idea of forming a spot gold market and that he expected to settle the process of gold delivery with traders by year-end.

MTS Gold president Kritcharat Hirunyasiri said all gold traders had acknowledged the need for a spot gold market in Thailand, but many aspects remained to be sorted out.

"We've been in talks on this issue for five years, as some members disagreed with setting up the exchange beacause they thought they could provide such services to customers when Singapore launched its spot gold market," he said.

"Singapore took only three years until its market trading began."

The Singapore Exchange is in a "soft launch" of its precious metals exchange, with official operations to start in September.

Some foreign brokers in Thailand with a network in Singapore can offer better services with more efficiency, and local dealers have seen trade volume plummet 30%.

The trading value of gold in Thailand is roughly 2 trillion baht a year, Mr Kritcharat said, adding that if the gold exchange were run by the SET, investors would have more confidence.

He said Thailand's gold exchange should be denoted in US dollars to sharpen competitiveness and mitigate currency risk.

"When market participants have agreed to set up the exchange, then we will work out the details and related laws," he said.

"Physical settlement also lays the groundwork for gold exchange trading, so the SET will work closely with other participants from now on," Mrs Kesara said.