High-speed train gets go ahead
Business

High-speed train gets go ahead

The National Council for Peace and Order (NCPO) has approved two high-speed train projects at a total cost of 741.4 billion baht. The two routes approved are intended to serve as a transport link between Thailand and southern China. 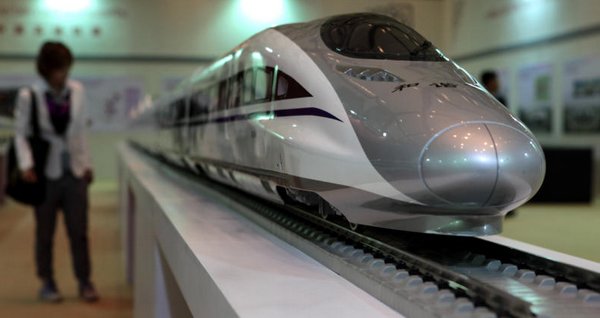 Proposals for a high-speed train from Rayong to Nong Khai - and on to China - were first made in October, 2013, at an exhibition sponsored partly by China Railways. (Photo by Chanat Katanyu)

Permanent secretary for transport Soithip Traisuth, however, said the maximum speed of the trains to be operated on the new routes, between Nong Khai and Map Ta Phut and between Chaing Khong and Ban Phachi, would have to be reduced to 160 kilometres per hour from 200 km/ph.

“The high-speed train dual track standards will be maintained even though the maximum speed of the trains will have to be lowered from 200km/ph to 160km/ph. This is to allow a possible shift to a higher speed train system at a later date after more investment in the future,” said Ms Soithip after meeting the military about the country’s infrastructure development scheme.

The construction of the two routes will begin next year and should be completed by 2021.

The construction of these two high-speed train routes is part of the eight-year infrastructure development scheme beginning from next year until 2022.

The working group comprising the National Budget Bureau and the Transport Ministry will next work out a budgetary plan for the projects.

The group, chaired by NCPO deputy chief ACM Prajin Jantong who oversees economic affairs, is expected to come up with a conclusion on the funding sources in a month.

A state source said the routes are in line with a proposal by China which wants to link its lower southern region to Southeast Asia via Thailand.

The high-speed trains will be strategic routes for China to gain more economic influence in the region.

During the Yingluck Shinawatra administration, China proposed to invest in the high-speed train projects for Thailand but it requested land and property management along the tracks.

These six routes will receive a total construction budget of 117.4 billion baht.

Another route from Chachoengsao to Kaeng Khoi in Saraburi was pending a bidding process and scrutiny by the junta’s committee asked to examine the public sector’s spending, said Ms Soithip.

As for the development of the highways, a number of major highways will undergo a renovation plan. They include Highway No.4 (Krabi-Huay Yot), Highway No.12 (Kalasin-Somdet) Highway No.304 (Kabin Buri-Pak Thong Chai), Highway No.314 (Bang Pakong-Chachoengsao), and Highway No.3138 (Ban Bung-Ban Khai).

The construction of four electric rail routes in Bangkok, meanwhile, will be finished within the next three years, said Ms Soithip.

The other electric rail route projects are still pending either the bidding process or the pre-bidding preparation process which includes an environmental impact assessment.

Meanwhile, the State Railway of Thailand (SRT) said Tuesday it had opened the bidding envelope submitted by MHSC Consortium, the sole contender in the contest to supply the electric system and electric trains for the Red Line.

The MHSC Consortium offered 49 billion baht, which was considerably higher than the median price, set at 28.8 billion baht, said Phakorn Tangjetasakaw, deputy governor of the SRT.

The SRT is expected to take one month to consider whether the offered price is reasonable and if so, the SRT would next seek approval for the proposal from both its board of directors and the Japan International Cooperation Agency (JICA).

Further approvals from the Transport Ministry and the junta will be needed.

JICA has provided the loans for the construction of this particular electric rail route.

Cambodia says lost artifacts found in Gallery 249 at the Met

In the 1970s, long after its encyclopaedic collection had been acknowledged as among the world’s finest, the Metropolitan Museum of Art recognised it had slender holdings in South or Southeast Asian art. One in-house estimate suggested that no more than 60 objects were worth exhibiting.

Bangkok Council on Thursday unanimously approved a budget of 79.71 billion baht for the coming 2023 fiscal year, starting Oct 1, as City Hall plans to use most of the money to ease the city's most nagging problems including flooding and traffic congestion.