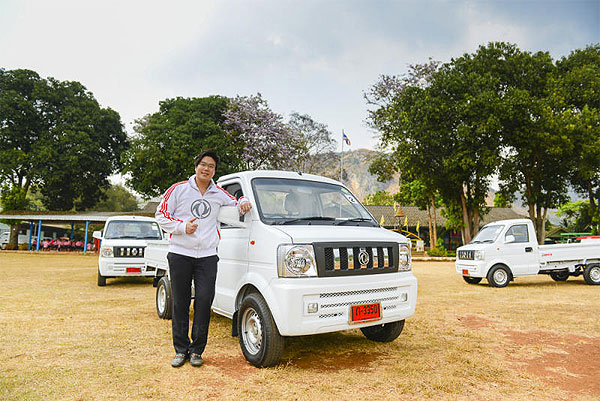 “We aim to sell 300 units of mini trucks in Laos via six local outlets nationwide starting from September,” said managing director Pitaya Tanadamrongsak. “Our partner outlets are capable of providing service and spare parts on a par with DFSK’s dealers in Thailand.”

The company has been authorised by China’s Dongfeng Motors Corporation to export small trucks assembled in Thailand to four countries: Laos, Vietnam, Myanmar and Cambodia.

Mr Pitaya expects a surge in Laotian sales to 1,500 units next year.

DFSK Thailand also plans to export 1,000 small trucks to Vietnam by the end of this year, and it is studying the possibility of partnering with local dealers to distribute small trucks in Myanmar.

The company began operations in 2008 as an authorised distributor.

In 2010, DFSK Motors, a top-three car maker in China with yearly production capacity of 3 million vehicles, built a 100-million-baht factory in Chachoengsao province.

In August of last year, DFSK Thailand announced that it would increase its annual production of small trucks and minivans by 60% to 8,000 units in 2014.

DFSK expects to sell 2,600 vehicles in Thailand this year against 3,000 units last year. Up to 90% of DFSK’s sales are of small trucks.

In related news, the company yesterday said it had been named as an authorised distributor for the Italian gas systems provider Lovato SPA.