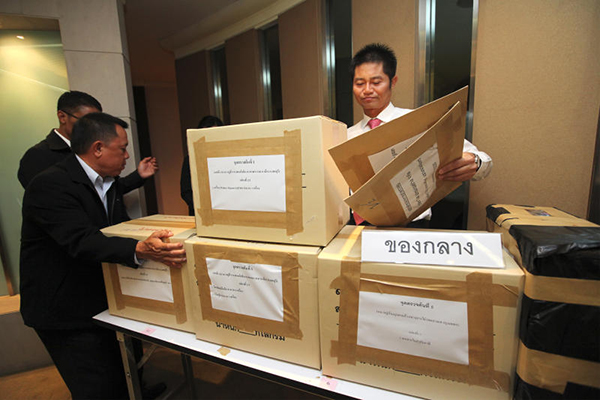 The Revenue Department estimated the loss of tax revenue at 100 million baht over one year.

Two people, Supatra Boonwat and Preuksa Boonwat, were arrested in Bangkok’s Bank Kae district where they were allegedly operating a cosmetics shop as a front for their business. Another person, Pornpawee Jirayuapichaikul, was later arrested at a house in Lop Buri province. They two groups have worked separately.

The gang was charging their buyers 3-4% of the value of the forged VAT invoices, according to Prasong Poontaneat, director-general of the Revenue Department.

Mr Prasong said the suspects issued fake VAT invoices to their buyers, usually small contracting firms, who could use them to inflate their booked costs, resulting in lower declared profit and lower corporate income tax paid to the department.

The suspects also filed appropriate tax forms with the department, a process to reassure their customers that the fraudulent process was completed.

The department currently has around 300,000 legal VAT invoices issuers.

Two hunger strikers were granted bail on Tuesday on grounds that their health was in serious danger, but the application of a third was rejected.

HATAY, Turkey: Rescuers in Turkey and Syria braved frigid weather, aftershocks and collapsing buildings Tuesday, as they dug for survivors buried by an earthquake that killed more than 5,000 people.