A sharper downturn across the property sector in China will affect the country's macroeconomic landscape, although the overall impact is still manageable, according to a new report by Moody's Investors Service. 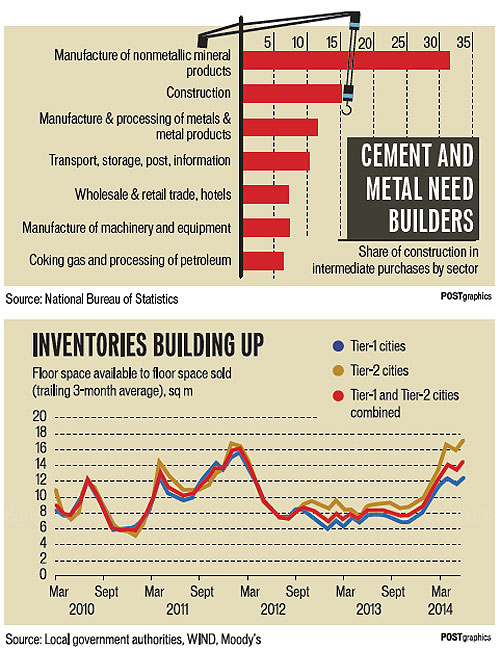 "The current baseline scenario for China's economy assumes a slowdown in the property sector, with growth in sales volumes of 0-5% over the 12 months from June 2014 onward," said Michael Taylor, a Moody's managing director and author of the report. "We view this forecast as consistent with GDP growth in the range of 6.5% and 7.5%, consistent with the stable outlook."

China's property market had been due for a correction for some time after years of rapid development. The government is being very cautious about intervening because it does not want to touch off a new round of unsustainable activity that could add to pressure on banks already struggling with bad loans.

Many developers are no longer taking part in government land auctions because they do not want to commit to any more new projects until the market absorbs existing supply.

The Moody's report offers a negative outlook on the property sector as a whole, suggesting two scenarios for possible economic and credit effects.

Moody's noted, however, that the impact of the downturn could be limited by two factors. First, household indebtedness is relatively low. Second, the government is expected to ensure that banks' non-performing loan (NPL) ratios do not get any worse.

China's economic and financial structure suggests that the banking sector should be resilient in the face of the current property downturn, the report added.

First, with debt at around 35% of GDP, households are comparatively unleveraged, making the transmission of shocks unlikely. Moreover, in the event that rising levels of NPLs begin to show signs of affecting to the banking system, the government would provide additional equity capital in order to avoid a credit crunch.

However, the impact of property sector weakness could be spreading to the rest of the economy through supply chain links.

"The construction, metals and machinery sectors would be credit-negative from the downturn of property," said Mr Taylor. "These supply chain effects would be large enough to shave between 1.5 and 2 percentage points off China's economic growth."

The first scenario outlined in the report assumes that a fall in property transactions and prices would directly affect construction activity. Without any adjustment to inventories, a 10% fall in sales volumes would lead to a 10% fall in building construction.

Additionally, because of the strong reliance on construction activity, cement and metal production are particularly exposed to any downturn in property development. Due to the large amounts of spare capacity in the cement and metal sectors, a slow in sales would likely depress prices even further, hitting the profits of companies with already stretched balance sheets (see graphic).

Mr Taylor added that a downturn in property transactions would also negatively affect the finances of local governments, which rely to a large extent on land sales as a source of revenue.

"In the event that the central government would need to bail out some local government financing vehicles (LGFVs), Moody's estimates that every 10% of LGFV debt that needs such assistance would only amount to a little over 1% of GDP," he said.