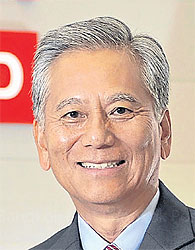 Tolentino: Recovery expected in this half

"Our new-car customers remain in good shape," said president Henry Tolentino. "We expect the Thai economy will recover in the second half as the political conflict is muted and people are more confident in spending and paying back their personal loans."

Toyota Leasing reported loan growth of 46.5% last year to almost 300 billion baht, driven by the previous government's first-time car buyer scheme. But it acknowledged loan growth this year is expected to hover around 26%.

New cars now account for 79% of Toyota Leasing's auto loan portfolio, with 5% from certified used cars under Toyota Sure and 16% from other lending.

TMT, the local unit of the Japanese car maker, recently cut its local sales forecast to 330,000 vehicles this year from 400,000 projected earlier, even though it says Thailand's political situation has become more stable.

For the overall market, Toyota also cut its forecast for domestic car sales this year to only 920,000 vehicles, down from 1.15 million projected earlier.

It would be the first year Thailand's domestic automotive sales fell below 1 million vehicles after selling 1.33 million last year and 1.43 million in 2012, driven by the first-time car buyer scheme.

For the first half of the year, overall domestic car sales fell 40.5% to 440,911 vehicles, while Toyota reported yesterday its domestic sales stood at 163,997 vehicles for the period, down 30.9% year-on-year.

However, Toyota forecasts domestic sales will return to 1 million vehicles next year as the economy is expected to grow 4-5%.

Despite Thailand's political problems, Toyota Motor Corporation said earlier in the year that it remained committed to expanding production capacity here to 1 million vehicles a year over the next three or four years.