Mitsubishi Estate Group, one of Japan's largest developers, will continue its investment in condominium development with SET-listed developer AP (Thailand), announcing a fourth joint venture worth 3.3 billion baht because it is confident in the long-term Thai economic outlook. 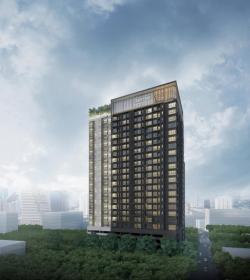 Rhythm Sukhumvit 36-38 is 72% sold after its launch in May, with the 2.9-billion-baht project comprising a 25-storey building with 497 units priced from 3.9 million baht.

Both companies target a return on equity of about 20% a year and will focus on locations near mass transit lines in Bangkok.

Mitsubishi will inject around 1.5 billion baht in this project after investing 2.5 billion earlier this year into three condo projects with AP.

"Lower economic growth is projected for this year only. Our investment depends on a long-term outlook and the economic expansion of Asean," said Katsuaki Mori, senior executive officer for international business of Mitsubishi Jisho Residence Co, a subsidiary of Mitsubishi Estate Group.

For 2014-16, Mitsubishi plans to invest US$1.8 billion in overseas real estate including in existing destinations such as the US, Europe, China, Singapore, Vietnam and Thailand as well as new ones Malaysia and Indonesia.

"Mitsubishi can strengthen our internal management system, improve our working process and reinforce quality control and construction processes," he said. "It can also maximise our investment and help us diversify risk."

Its first three joint venture projects worth a combined 7.25 billion baht comprise Rhythm Asoke II, Rhythm Sukhumvit 36-38 and Aspire Ratchada-Wongsawang and recorded 50% sales on average after launching a week before the coup in May. Siam Commercial Bank is providing the financing.

Mitsubishi visited the sites several times, walking from Thong Lor to Phloenchit to learn about the Thai lifestyle and property development along the road.

All the projects will have a Japanese design, with the one on Sukhumvit Sois 36-38 project gaining interest from Japanese buyers.

The fourth project is Aspire Sathorn-Thapra located on a 5.3-rai site near The Mall Thapra, with 1,219 units priced from 1.8 million baht.

During the first seven months of this year, AP recorded 11 billion baht in presales, with 53% from low-rise units. It expects to have 21 billion baht both in presales and revenue by the end of the year.

AP shares closed yesterday on the Stock Exchange of Thailand at 7.25 baht, unchanged, in trade worth 81.3 million baht.