Driven by robust sales, Mercedes-Benz (Thailand), the local unit of the German luxury car maker, is studying the possibility of producing compact and hybrid cars locally. 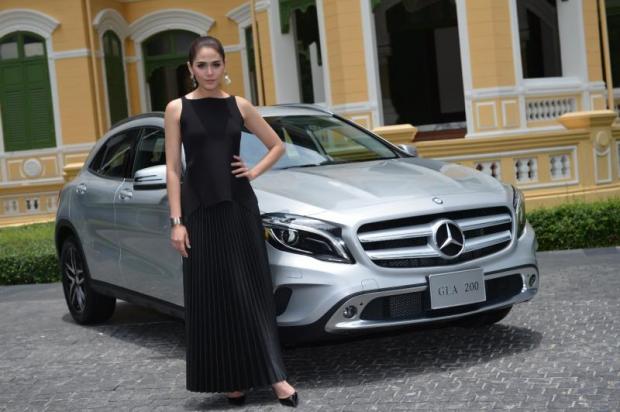 Mercedes-Benz has announced actress Araya 'Chompoo' Hargate as the first brand ambassador in Thailand for the new GLA-Class sport-utility vehicle.

"At present, C-Class, E-Class, S-Class and M-Class models are made in Thailand. We're looking to expand the assembly line here to cover other models," vice-president Martin Schulz said, adding that more details would be disclosed in 2016.

The new tax regime will be based on carbon dioxide emissions, E85 compatibility and fuel-efficient vehicles such as eco-cars and hybrid vehicles and not engine size like under the current structure.

The new regime is scheduled to take effect in January 2016.

One-third of Mercedes-Benz cars sold in Thailand are compact models with prices starting from 1.99 million baht.

In the first seven months of this year, Mercedes-Benz sold 5,213 cars in Thailand, up by 18% year-on-year.

It enjoys a 47% market share for luxury cars, making it the top local maker in this segment. BMW, Volvo and Volkswagen also make luxury cars in Thailand.

President and chief executive Michael Grewe said Mercedes-Benz is upbeat about keeping its growth momentum in 2014 and remaining the luxury car leader in Thailand for the 14th consecutive year.

"Despite overall vehicle sales shrinking 39.2% over the first seven months, the luxury segment has felt only a little pinch," he said. "Mercedes-Benz is still happy about its performance this year."

The Federation of Thai Industries' automotive club on Wednesday reported domestic car sales last month numbered 69,267 vehicles, down by 29.5% year-on-year, with the seven-month figure 510,178, down by 39.2%.