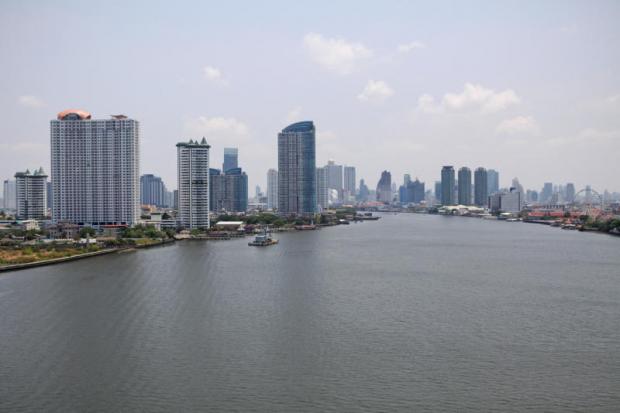 Bangkok is seen from the Rama III Bridge over the Chao Phraya River. Experts predict Thailand's property market will be an attractive investment for foreigners after the launch of the Asean Economic Community late next year. SEKSAN ROJJANAMETAKUL

"Opportunities in the property sector in Asean members are admittedly large," said Sopon Pornchokchai, president of the Agency for Real Estate Affairs.

"But we suggest Thai developers start with small-scale projects to minimise risks before expanding once successful."

Before 1997, many Thai developers tried to do property business abroad. But many came back to stay focused on Thailand due mainly to differences in people's lifestyle, culture and many relevant regulations and laws.

Prateep Tangmatitham, chief executive of SET-listed developer Supalai Plc, said Thailand was not an easy place for foreign investors to conduct property development due to barriers to foreign property ownership.

Official documents related to property and land are all in the Thai language, while local units of measurement such as wah, ngan and rai are still used, he said.

"It's not easy for foreign investors to enter the Thai real estate sector, as they cannot wholly invest by themselves but need to establish a joint venture with local firms," said Apa Ataboonwongse, president of Richy Place 2002 Plc, recently listed on the SET.

Nonetheless, Apichard Detpreechar, senior vice-president and manager for housing loan products at Krungthai Bank, said provinces near the border have high potential for housing development due to the positive impact from neighbouring countries such as Laos, Cambodia and Vietnam.

Of new home loans totalling 60 billion baht the bank released in the first seven months of this year, 30-40% were in the Northeast.

Prof Dr Chira Hongladarom of Thammasat University urged Thai developers to be well prepared for not only funding and marketing but also human resources improvement for the Asean Economic Community.

"Vocational graduates in the fields of engineering and architecture are in short supply in the Thai real estate sector," he said. "The sector should focus on human capital to drive business growth and sustain the industry. As long as our people have quality, we don't need to be afraid of anyone [in other Asean members]."