Thailand has one of the highest growth rates of smartphone users in the world, many of whom like to get things done with a click on the device in their palms. 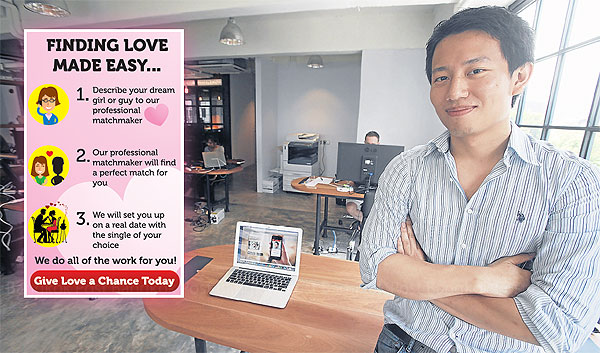 The harsh reality of being single again led Kavin to start Noonswoon, which won the AIS StartUp award 2013, helping it to gain access to seed funding. Pornprom Satrabhaya

Our lifestyle is changing. And, like it or not, even dating has gone digital, with increasing success rates across the world. There are hundreds of dating websites in Thailand alone. It comes as no surprise, then, that there is now a mobile application offering you a chance to find true love.

Kavin Asavanant, 30, never thought about a dating application until his personal life became a roller-coaster and suddenly he found the need for one. He was soon to become the founder and managing director of Noonswoon.

Noonswoon consists of two words; Noon or midday, and swoon, which is the feeling of butterflies you feel when you've met someone special.

A recipient of a government scholarship, Mr Kavin spent seven years studying for a bachelor's and then a master's degree in computer science at Stanford University.

"That was an experience that changed my life because I had the chance to see people in the internet start-up business and it made me realise that it was not out of my reach," he says, adding that the creators of YouTube and Instagram were among his Stanford contemporaries.

Mr Kavin returned to Thailand in 2008 and for a while worked in various contract jobs in IT. In order to work off his scholarship, he became a lecturer at Chulalongkorn University's business studies department, a position he still holds.

Noonswoon was started in late 2012, after an unfortunate event left him single. He began to experience the harsh life of working singles, whose friends are getting married.

This lead him to conduct a personal feasibility study, and he found that there were no solutions for people like him – young, urban working singles — as most existing services were aimed at expats finding local partners.

"I wanted to make something hip and cool for people like us to use," he says.

The application was launched in March 2013 and a month later Noonswoon won the AIS StartUp 2013 award, beating more than 200 teams. Winning the AIS StartUp exposed Noonswoon to investors and access to seed funding.

"I’m proud to say that we were among the first companies able to get funding from Singapore. It also brought attention to the start-up scene here because then there was only Ookbee, an online bookstore, and not much else," he says. "And to buy food on the street with money from Singapore is quite an accomplishment."

In total, Noonswoon secured US$400,000 in seed funding from various investors.

Despite the success, Mr Kavin says raising funds had been tough for him because the country is mainly known for rice, durian and tourism, not technology.

"When we negotiated with investors, they tended to underfund us because Thailand had no proven track record or potential in technology start-ups. Convincing Singapore and Japanese companies to believe that we're going to succeed was tough," he says.

"I think many investors aren't much smarter than we are but they just wanted to assess whether we could succeed or not. But once we convinced one of them, others followed."

The Noonswoon app works every noon when it sends you potential matches that will have the most similar socioeconomic and lifestyle background as you.

The information is gathered from a user’s Facebook profile when they agree to use the application. This ensures people they are not being matched up at random.

If both parties agree, or "like" each other in the application, they can message each other via the app by spending 10 candies — Noonswoon's in-app currency. When you first use the app, 50 candies are available. To get more candies users either purchase them through their mobile application for 99 cents or via Noonswoon promotions.

Mr Kavin says the company's main demographic is 28 to 40-year-olds, people who are busier and less likely to have a lot of spare time to meet someone.

Mr Kavin says most users of Noonswoon are in Bangkok followed by Nakhon Sawan, Khon Kaen and Phuket.

Two months ago, Noonswoon launched its premium service which offers a more personalised match-making without having to wait until noon. Around 500 people have expressed interest in joining.

Mr Kavin warns potential users the service is not for everyone as applicants have to be interviewed for background checks such as whether they are really single as well as their career prospects.

If successful, the Noonswoon team will search the database for potential matches. If both sides accept each other then the company will arrange a date and all logistics associated with the process.

"What makes Noonswoon different to other match-making companies is that our service is 10 times cheaper than what they offer," says Mr Kavin.

But he assures everyone that the quality and user experience are similar to its rivals, offering more convenience and more features for people to play with.

He declines to discuss the company's revenue because it is still in the early stage and since it has grown very fast this might not be a meaningful measure of the company.

Noonswoon started with three staff and now has five. Soon there will be nine.

Mr Kavin says while Noonswoon still uses its seed fund he expects revenue to be self-sustaining by the end of the year.

The company is also testing the application in Hong Kong and Singapore.

"Those places have a similar population make-up as Thailand, only with a larger GDP. Some countries in the region have a lot of unspoken cultural rules making it tougher to enter those markets," says Mr Kavin.

Ultimately, he wants to use technology to help people with interesting qualities meet someone similar.

"Many Thais seem to think that this sort of thing is a matter of faith and that is partly true. But if you wait without doing something for yourself then your life is likely to remain the same."

And what about himself? Has he found his true love through his own dating application?

"As the founder, I do use the application. But the hectic schedule of running Noonswoon has prevented me from being an active user. Once the operation side settles down, I will, of course, open myself to the opportunities the application presents," he says with a laugh. 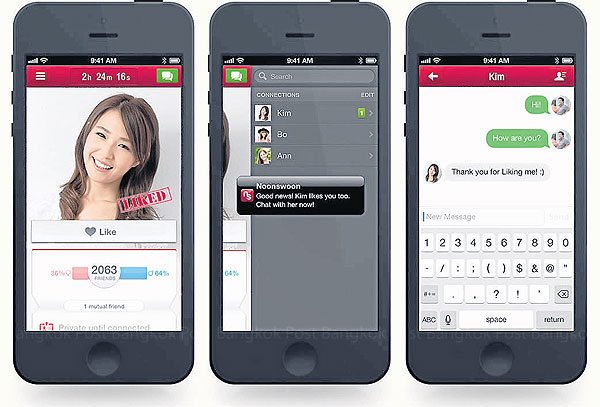