The National Council for Peace and Order (NCPO) is likely to delay the sale of 210,000 tonnes of rubber in state-owned stockpiles, caving in to rubber farmers who feared selling the stocks in one go would drive down prices. 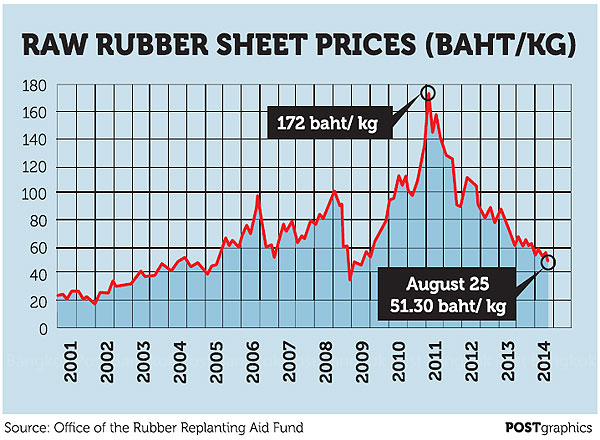 The NCPO said the sale would not go ahead without measures in place to ensure prices remain stable.  Farmers welcomed the decision.

"There will be no protest if the NCPO keeps its promise," said Rubber Council of Thailand president, Uthai Sonlaksap, who represented farmers during negotiations yesterday with Gen Chatchai Sarikalaya, NCPO deputy chief.

The rubber farmers' network yesterday submitted a letter to Prime Minister Prayuth Chan-ocha proposing measures to reverse the fall in rubber prices. Gen Prayuth assigned Gen Chatchai to talk to the farmers and they reached a deal last night.

In May, the Administrative Court granted an injunction to stop the sale at the network's request. However, the injunction has not been renewed, and the sale was likely to go ahead today.

"While the government is preparing to sign the deal, rubber farmers from six southern provinces — Trang, Phatthalung, Nakhon Si Thammarat, Surat Thani, Krabi and Satun — have asked the prime minister to look at the matter urgently," Mr Uthai said.

Of 10 potential buyers, the best offer stands at 58 baht per kilogramme for raw rubber sheets and 62 baht/kg for smoked rubber sheets.

The government bought the rubber at an average price of 104 baht/kg, a source from the Agriculture and Cooperatives Ministry said.

Meanwhile, Winthai Suwari, NCPO spokesman, said the military council has approved a 5.94-billion-baht budget to overhaul the rubber planting industry, of which 977 million would be spent this year.

The funds would be focused on rubber stock management, liquidity injections for farmers, processing and marketing developments, and research and development for increasing the value of rubber products, he said. Earlier, rubber farmer Somkid Unping, from Surat Thani, said his hopes for a better deal for rubber farmers in return for their loyalty had been dashed.

"We have not staged a rally for months because we believed the new government would not neglect us," Mr Somkid said.