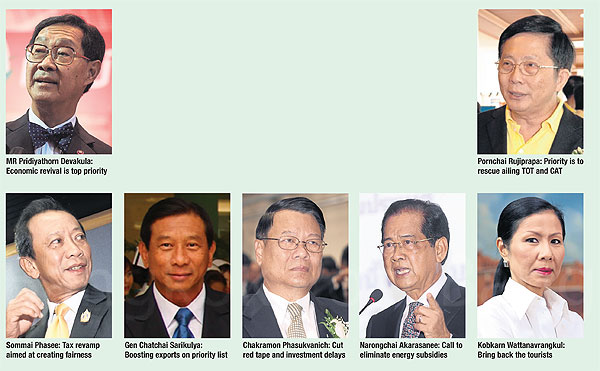 Prime Minister Prayuth Chan-ocha announced his new cabinet line-up yesterday evening following its royal endorsement. As he said earlier, the government will be dominated by the military. However, the army chief also said it should not be a concern as he had ensured representation from a wide cross-section of society in order to achieve what he promised the public since he seized power from the former government.

The economy is a top priority. Gen Prayuth’s economic team has gained the backing of industry leaders. However, what the public will want is for them to tackle the economic woes that have plagued the country for years.

Profile: MR Pridiyathorn, 67, is an aristocrat and received an MBA from the Wharton Business School, University of Pennsylvania, US. He was a senior executive vice-president at Thai Farmers Bank (now Kasikornbank) before shifting careers to become a spokesman for Gen Chatichai Choonhavan government. He has been a deputy commerce minister, a senator and central bank governor, along with being deputy prime minister and finance minister for a military government. He resigned as chairman from Post Publishing last week.

He is now head of the economic advisory team for the National Council for Peace and Order (NCPO).

Urgent tasks: The priority is to improve the Thai economy through the government infrastructure investment project by drumming up new foreign direct investment and preparing the country for Asean integration in late 2015. The agriculture sector is also in critical need. Although prices subsidies are inevitable, the deputy prime minister must focus on finding a sustainable answer.

Rolf-Dieter Daniel, president of the European Asean Business Centre in Thailand, said the new cabinet's priority should be reviving the economy, improving competitiveness, and addressing corruption and transparency in public projects.

"The ministry must also address shortages for both skilled and unskilled labour. If the country wants to attract foreign investment then the issue of manpower is important," said Stanley Kang, chairman of the Joint Foreign Chambers of Commerce in Thailand.

Leigh Scott-Kemmis, president of the Australian-Thai Chamber of Commerce, said: "Impediments to doing business and red tape have to be resolved so businesses can operate efficiently and according to international standards."

Profile: He worked at the Finance Ministry most of his working life. He was director-general of the Fiscal Policy Office before a promotion to deputy finance permanent secretary, his last job until retirement. With his expertise in borrowing, he took over as deputy governor of Expressway Authority of Thailand for three years. After the 2006 coup, Mr Sommai took office as deputy finance minister under Surayud Chulanont's government for almost a year, working with MR Pridiyathorn Devakula, who was finance minister.

Urgent tasks: A tax revamp aimed at creating fairness, narrowing income inequality and generating government income is the priority for the Finance Minister under the interim government. It is the first time in two decades the Finance Ministry has instigated a series of tax changes. The land and buildings tax, inheritance tax and excise tax base change are the first three tax drafts to be considered by the National Legislative Assembly. Financing for the 2.4-trillion-baht infrastructure development scheme recently approved by NCPO is another urgent task.

A Finance Ministry source who had approved of Mr Sommai's candidacy said the new finance minister could help drive the ministry's agenda forward given his fiscal management skills.

Profile: Gen Chatchai, 59, the NCPO's deputy chief, was a classmate of Prime Minister in Class 12 in the military pre-cadet school. Gen Chatchai was engaged in finance throughout his career with the Royal Thai Army. He was a former chief of the finance department, deputy comptroller-general, deputy chief of staff, and president of the Royal Thai Army Radio and Television Station (Channel 5). He was dubbed "the army's purse".

Urgent tasks: Boosting exports should be high on the list. Gen Chatchai should make the ministry's more effective, resolve problems hindering trade and regain the trust of foreign trading partners.

Chookiat Ophaswongse, honorary president of the Thai Rice Exporters Association, said selling the state rice stockpile would be a priority. "It should be done flexibly and quickly so the country won't lose its opportunity this year because Vietnam has a limited stock," he said.

Profile: Mr Chakramon, 67, is a former industry permanent secretary. After graduating in economics from Chulalongkorn University, he pursued a master's degree from Cal State Northridge in the US. In 2001 he was appointed secretary-general of the Board of Investment. Two years later, he served as secretary-general of the National Economic and Social Development Board (NESDB).

Urgent tasks: The industry minister needs to cut red-tape procedures and impediments to building new factories. The delay in issuing plant operating permits, Ror Ngor 4 licences, to 870 factories by the previous government was a major stumbling block for investors. All regulations hindering private investment should be revamped. Another focus should be enhancing the role of small businesses so they can drive economy.

Restructuring the sugar and sugar cane industry is also a must. The existing revenue-sharing format has growers and millers splitting the money 70:30. Floating sugar prices and zoning plantation areas are first steps. Outlining new rules for awarding mining concessions, especially gold mining, is another a concern.

Profile: Mr Narongchai, 69, received a PhD in economics from Johns Hopkins University, US. He has been a commerce minister, senator and chief executive of General Finance & Securities until it went bankrupt during the 1997 financial crisis.

He served as an adviser to the deputy prime minister on economics in many governments, including the fugitive former prime minister Thaksin Shinawatra. After the coup in 2006 he served as a member of the National Legislative Assembly. He is now on the economic advisory team led by MR Pridiyathorn.

Urgent tasks: "I won't feel any pressure because I have worked in many ministries and have a broad range of experience," said Mr Narongchai.

"Energy reform is an urgent task, but the public attention means we can push forward reform cautiously using comments from various parties."

Chen Namchaisiri, a vice-chairman in the Federation of Thai Industries, said the most urgent task would be to eliminate energy subsidies because consumers would never learn to efficiently consume energy if they didn't realise the actual cost. The new minister needs to educate the public on the importance of efficiently managing the country's resources.

"People have spent too much time arguing about the ownership of pipelines, and for what? Even if the Finance Ministry assumes control of it, does that change anything? I don't think so. PTT has been the only local company capable of investing in a gas pipeline," said Mr Chen.

He served as a deputy secretary-general of the NESDB and chairman of PTT Aromatics and Refining Plc. Last week he resigned as chairman and board member of the board for Electricity Generating Plc.

Urgent tasks: Rescuing the ailing state telecom enterprises is the top priority. A full scale implementation of telecom regulations and laws is another big challenge.

Mr Pornchai said TOT Plc and CAT Telecom faced a reckoning because they could no longer book concession revenue under the Frequency Allocation Act. He added enhancing their competitiveness alongside strong private operators would be a challenge.

Private mobile and IT companies
urged the new minister to address chronic problems, by lowering taxes for companies using local ICT networks and equipment for example.

Manoo Ordeedolchest, honorable president of the Association of the Thai ICT Industry (ATCI), said a national broadband policy was needed to deal with the convergence of broadcasting and telecom. Adirek Patitus, ATCI president, said an open data law was needed to maximise data use.

Profile: Mrs Kobkarn, 54, is chairperson of Toshiba Thailand Co. Armed with a bachelor's degree in architecture from Rhode Island School of Design in the US, she has experience in electrical appliance and industrial estate businesses.

Mrs Kobkarn will be the first woman to head the ministry.

Urgent tasks: Mrs Kobkarn's first job is to restore tourist confidence and lure them back to the country.

Tourist arrivals in Thailand fell 10% to 13.6 million during the first seven months, partly because of the political crisis, coup, curfews and martial law. The arrivals target next year is 28 million generating 2.2 trillion baht in revenue.

Piyaman Techapaiboon, president of the Tourism Council of Thailand, praised Mrs Kobkarn for her business acumen and anti-corruption activities.

Tourist safety, illegal hotels and out-of-date tourism laws should also be high on the agenda. The council forecast tourism income could reach 4.4 trillion baht by 2018.

Hong Kong will allow vaccinated tourists from all but 10 places in the world to enter the city starting on Aug 9, a significant easing of some of the tightest border curbs in the world.