Consumer confidence rose for the fourth month in August, hitting a 13-month high, thanks to greater political stability and people's increasing faith in the country's economic recovery.

The University of the Thai Chamber of Commerce (UTCC) reported Thursday that the consumer confidence index rose to 80.1 points last month from 78.2 in July, 75.1 in June and 70.7 in May, when the index advanced for the first time in 14 months.

Other reasons included the establishment of his administration, the state planning agency's forecast of the country's growth at 3.5% to 4.5% next year, falling retail fuel prices and the baht's appreciation as well as the Monetary Policy Committee's decision to hold the rate at 2% to aid recovery.

The army seized power on May 22, and since then the military government has made delayed payments to rice farmers, approved urgent infrastructure projects and accelerated the approval process of major investment projects.

However, Thanavath Phonvichai, the UTCC's vice-president for research, said negative factors that might affect consumer confidence exist including the recent announcement by the National Economic and Social Development Board (NESDB) trimming this year's economic growth forecast to between 1.5% and 2% from 1.5% to 2.5% projected in May.

Thailand avoided a technical recession after the economy enjoyed a surprise upswing in the second quarter. A technical recession is defined as two straight quarters of negative economic growth as measured by seasonally adjusted quarter-on-quarter figures for real GDP.

The UTCC yesterday cut its economic growth forecast to 1.5% to 2% for this year from an earlier projection of between 2% and 2.5%. It projects the economy next year could grow by 4% to 5%.

"If the state's fiscal budget disbursement becomes stalled or delayed, we expect growth of only 1.5% at the end of this year," Mr Thanavath said. 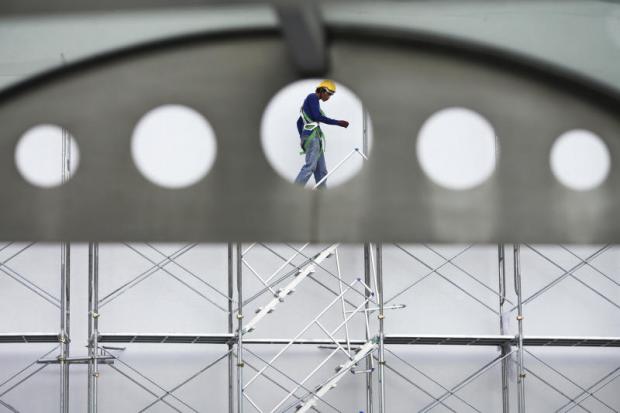 A construction worker is seen at a building renovation project in Bangkok. Consumer confidence continues to rise thanks to political stability and the improving economy, according to a UTCC survey. PATIPAT JANTHONG.