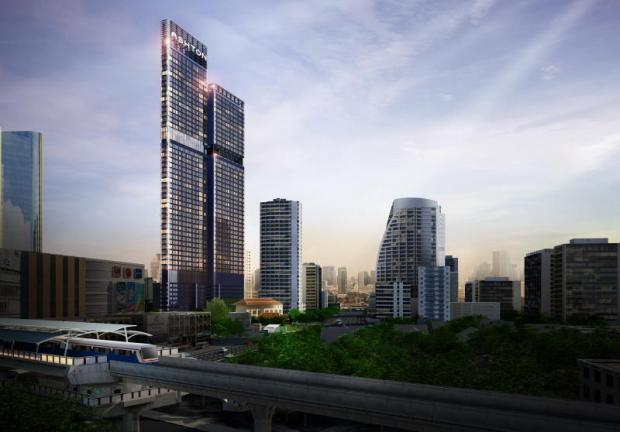 Designed by A49, the 6.35-billion-baht Ashton Asoke will be located close to Sukhumvit subway station. Its 783 units will start from 30 square metres and be priced from 6.9 million baht.

Tomoo Nakamura, executive director of Mitsui Fudosan (Asia) Pte, based in Singapore, said the joint venture with Ananda was a long-term investment due to the market potential of Thailand and Bangkok.

"We will continue to invest in Thailand just as we have done in Singapore with Hong Leong Group for 42 years," he said yesterday during a Bangkok visit to launch new condo projects.

Mitsui Fudosan entered Thailand in 1973 when it acquired an office building in Bangkok. Last year it co-invested in a residential project — the Ideo Q Chula-Samyan condo — in Thailand for the first time with Ananda.

"We hope Mitsui Fudosan will use us as an investment hub to expand to neighbouring countries in Southeast Asia," said Ananda president and chief executive Chanond Ruangkritya.

The company expects to have 6 billion baht in sales from the four projects and intends to revise up this year's sales target from 11.5 billion baht. In the first eight months, it recorded 5.2 billion baht in presales.

As of June 30, it had a sales backlog of 17.5 billion baht. More than 3 billion baht will be realised in the second half of this year.

In the first half, it realised 4.1 billion baht in revenue.

"We're strongly confident in the new government's investment plan for mass transit lines," said Mr Chanond. "By 2019, there will be 222 stations in Greater Bangkok, but not all of them will be suited to condo development. Density in the area is another factor to consider."

For the plot of nearly three rai for the Ashton Asoke project, Ananda spent 1 million baht per square wah. It negotiated with the Mass Rapid Transit Authority of Thailand to use its car park at Sukhumvit subway station as an entrance.

In the fourth quarter, Ananda plans to issue debentures worth 2.3 billion baht.

ANAN shares closed yesterday on the SET at 4.18 baht, down 18 satang, in trade worth 350 million baht.