Land for property development in Bangkok from lower Sukhumvit Road to Ekamai is in demand, with prices hitting another record high in the first half of this year at 1.8 million baht per square wah, four times higher than the appraised price. 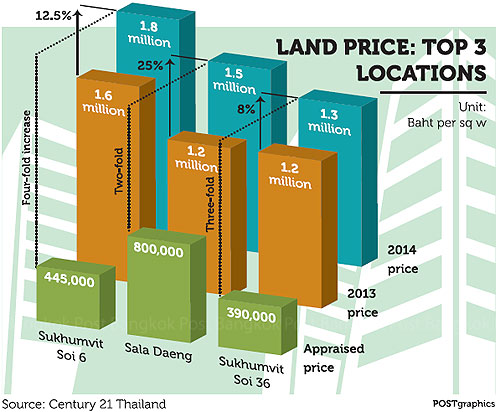 "Land prices in this area have risen significantly by a higher percentage than those in other locations, as there are new consecutive developments like EmQuartier upcoming in the Phrom Phong area," he said.

Phloenchit Road and lower Sukhumvit will continue to be prime locations. Despite high land prices, developers are prepared to invest in projects if the cost is feasible.

The locations are popular with expats and many offices. Condo buyers in this area are in the upper-end segment, preferring a large unit of 50 square metres or more.

A land transaction in May represented another new high in lower Sukhumvit at 1.8 million baht per sq w. The plot on Sukhumvit Soi 6 was acquired by Quality Houses Plc.

Last year, land prices on Sukhumvit Soi 6 finalised at 1.6 million baht per sq w, while the appraised land price by the Treasury Department was only 445,000 baht.

"There was a plot on Sukhumvit Soi 24 where the price was 2 million baht per sq w, the highest in the country. But it was an exceptional case," said Mr Kitisak.

"New mass-transit lines have triggered an interest in outer Bangkok locations. Current land prices are future prices in the next 3-5 years, as the locations are seen as a prospective economic area," said Mr Kitisak.

They include Phetkasem-Charan Sanitwong and Bang Pho-Bang Sue, where the Blue Line is being built, and the Bang Na intersection, where a shopping centre, Bangkok Mall, will be developed.

Outside lower Sukhumvit, the most popular locations were Thong Lor-Ekamai, where land prices were between 1.2 and 1.8 million baht per sq w, followed by Phaya Thai-Phahon Yothin-Sanam Pao-Saphan Kwai (750,000 to 850,000 baht). The third most popular location was Sathon-Sala Daeng-Suan Phlu.