Dr Prasert Prasarttong-Osoth, the president and founder, said two new buildings would be added to Bangkok Hospital's compound on Soi Soonvijai in the first phase. 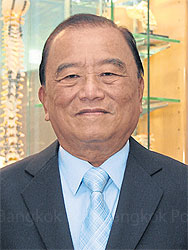 After those are completed in 2016, the company will move forward with the second phase in the following year, building four more buildings on the same four rai.

Dr Prasert said the new facilities would serve foreign patients, particularly from the Middle East, Europe, the US and neighbours such as Myanmar.

Two buildings with a combined 100 beds will be designed to serve Myanmar and the Middle East, while the other four will have 200 beds total reserved for Western patients.

Included with the beds will be medical equipment of developed-country quality, Dr Prasert said.

Dr Prasert said Bangkok Dusit would also increase the number of hospitals under its direct umbrella to 50 by next year.

The expansion is designed to boost the competitiveness of Thai hospitals to match Singapore.

The expansion will also serve to prepare Bangkok Dusit for an Asean patient influx once regional economic integration takes place late next year.

Presently, the group services 800,000 foreign patients annually, accounting for 25% of the total.

"The price of medical services in Thailand remains competitive and is not as expensive as in Singapore," said Dr Prasert.

"So we believe our good services and standards — the same as with US hospitals — will attract more patient numbers from Asean members after integration," said Dr Prasert.

Bangkok Dusit has partnerships with 10 major hospitals in the US for exchanges of information, technology and doctors.