Thai rice is in danger of losing further export competitiveness over the next 10 years after having been hurt by rising production costs over the past decade. 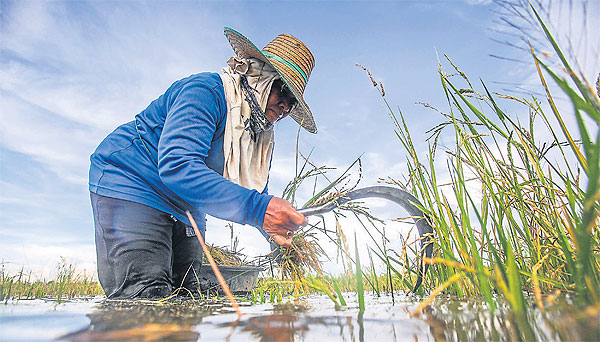 A rice farmer brings in the crop in Sukhothai’s Kong Krailat district. Local growers are speeding up their harvest after the Yom River flooded. Pattarapong Chatpattarasill

A survey by the University of the Thai Chamber of Commerce's Center for International Trade Studies revealed the proportion of Thai rice in the global market has shrunk continuously during that period, from 13% in 2004 to 8% today.

Centre director Aat Pisanwanich said Thai rice prices in the past 10 years averaged US$100-200 higher than the grains of competitors such as Vietnam.

But despite the higher prices, Thai farmers still have low disposable income due to their high production costs.

Over the period Thailand's productivity remains unchanged at only 450 kilogrammes a rai, while Vietnam's has risen to 1,200 kg per rai.

Mr Aat said Thai rice prices had proved more competitive this year, matching those of Vietnam's and expected to ease further thanks to accelerated efforts to dispose of state rice stocks.

Thailand has a stockpile of 15-18 million tonnes of milled rice accrued by the previous government, which had offered farmers pledged prices that were much higher than market prices.

"We estimate the country could lose 87 billion baht worth of export value over the next 10 years."

Thailand is thus being urged to accelerate overhauling the country's rice production process and restructuring production costs by either reducing chemical fertiliser use or subsidising 20% of farmers' production costs.

All relevant agencies and parties must be engaged in the reforms, Mr Aat said.

"A marketing survey should be a top priority, as it would allow us to know which types of rice and rice varieties are needed by potential buyers and how the entire production and supply chain should be improved," he said. "Rice quality standards should be clearly imposed."

Mr Nipon also suggested the government cut any form of subsidy for rice to encourage farmers in unsuitable areas to grow other crops or create extra jobs for them.

In the first seven months of this year, Thailand exported 5.62 million tonnes of rice, up by 55% year-on-year.