Up to 8 new projects at home and overseas

Siam Piwat Co, the operator of Siam Center and Siam Discovery, yesterday announced it will invest 55 billion baht to expand its retail projects in Thailand and abroad from 2015-19. 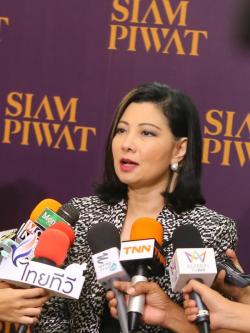 About 35 billion baht will be spent on new projects, while 20 billion will be used to build the IconSiam retail and residential project on the banks of the Chao Phraya River, said chief executive Chadatip Chutrakul.

Of the new projects, about 25 billion baht will be used to develop retail schemes on its own in Thailand and Asean, while 10 billion will be spent on joint-venture projects with foreign partners.

Siam Piwat will develop four speciality stores in Bangkok on its own.

The company is in talks with three international restaurant operators interested in opening outlets at its new stores. The deals are expected to be finalised in the last quarter.

Funds for new investments will come from its cash flow and bank loans.

Despite political tensions, new retail and property projects costing about 210 billion baht were announced in the last 12 months. This excluded investments by foreigners keen to explore opportunities in Thailand.

"We will continue to invest for the future. Our new projects will have new and creative retail and lifestyle ideas that are the first of their kind in Thailand, and perhaps in the world. This will provide beyond-expectation shopping experiences for visitors," Mrs Chadatip said.

Siam Piwat is considering eight projects at many locations inside and outside Bangkok as well as overseas.

In the past three years, the company has been approached by leading international firms to conduct a feasibility study on joint businesses in the retail, entertainment, arts and culture sectors. It expects to complete these projects in the next three to five years.

Siam Piwat recently extended its agreement for Loft, a franchised speciality store from Japan, and will open three more branches in the next five years.

Its own speciality stores, The Wonder Room and The Selected at Siam Center, offer fashion and home accessories from up-and-coming Thai designers. It will add more branches and is considering invitations to open stores in other countries.

As it prepares to expand, Siam Piwat is recruiting highly qualified people with Thai and overseas retail experience to strengthen its team. It also has staff exchange programmes with partners in Asean and elsewhere that serve to broaden management knowledge and improve the appeal of its services to tourists in Thailand.

This move will prepare the company for vast business opportunities when the Asean Economic Community is launched at the end of 2015.

Sales of Siam Piwat were more than 20 billion baht last year and are expected to reach 50 billion by 2017.