The credit quality of some Thai companies is projected to erode over the next 12 months due to a strong appetite for acquisitions and elevated capital spending, says Standard and Poor's Ratings Services (S&P).

However, high earnings and robust financial access are corporate strengths that will safeguard against credit risks, it says. 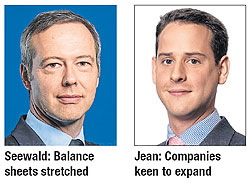 Thai companies have been among the most active in acquisitions among Asean companies and most of the massive deals over the past two years have been debt-funded, said Xavier Jean, S&P's director of corporate ratings for Asia-Pacific.

High capital expenditure and dividends are factors contributing to an increase in debt for Thai companies, with S&P projecting their capital spending in the first quarter was 10% higher than a year earlier.

Companies continue to spend a lot of money because of their expansion strategy and have a fairly high distribution of dividends, so inflows from their operations are growing less as outflows continue to grow, said Mr Jean.

The 100 companies S&P surveyed in six Asean member states are estimated to have accumulated a debt of US$270 billion, with 20% from the bond market and the rest from bank loans. The 20 surveyed Thai companies had a net debt of $40 billion.

On average, companies in Asean can service their interest expenses with their earnings by about eight times, while the debt-service ratio for Thai companies is 6.5 times. This allows companies to withstand a major shock such as a hike in interest rates, says the S&P report.

However, the scenario is completely different for medium-sized companies as their market access and financial sources are more limited, said Mr Jean.

Michael Seewald, managing director and analytical manager for corporate ratings in Asia-Pacific, said Thai conglomerates and their subsidiaries have been active in acquisitions, so their balance sheets are sometimes stretched.

"Growth strategies of Thai conglomerates can be unpredictable, creating risk," he said. "Their financial reporting can be difficult to interpret."