The Agriculture Ministry has put on hold a planned sale of 200,000 metric tonnes of rubber from state stockpiles, a move that may help appease farmers threatening protests as prices slump to a five-year low.

The ministry, which is in charge of rubber policy, is examining the quality and quantity of inventories and reviewing strategies to ensure the raw material is sold at a "reasonable" price, Minister Pitipong Phuengboon Na Ayudhaya said in an interview. The move was in line with requests from farmers for the process to be transparent.

Thai prices dropped 75% from a record in 2011 on concerns slowing growth in China, the top consumer, will cut demand for the commodity used in tires and expand a global glut. Thailand, which represents 34% of global output, accumulated the reserves under a purchase program initiated by former prime minister Yingluck Shinawatra to boost farm incomes. Growers threatened street protests after the military junta that seized power in May refused to support prices. 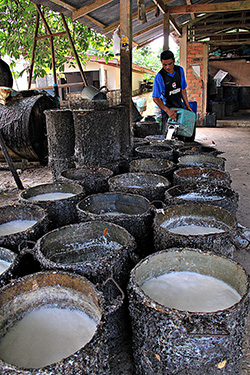 A rubber farmer pours latext at his farm in southern Thailand. Farmers have been pressing the government not to sell off its stockpile of rubber, saying it would depress already low market prices. (Bangkok Post photo)

"I would need a good price for stockpiles and some sort of agreement to buy rubber from the next tapping period at a certain price," said Mr Pitipong, a 67-year-old former bureaucrat. "If it hurts the pricing of rubber, we will have to think very carefully," he said, referring to a reserve sale.

The government is considering more measures to help farmers but has ruled out a purchase program for boosting prices as it would distort the market, Mr Pitipong said.

"We don't want to use taxpayers' money to disrupt the free, commercial system," Mr Pitipong said. "It's easy to buy stockpiles but difficult to sell them at the right time and the right place. In the long run, this isn't going to work."

Export prices of Thai ribbed smoked sheet in the Songkhla market dropped 0.6% to 49.95 baht a kilogramme yesterday, the lowest level since December 2008. The price has tumbled from a record 198.30 baht in 2011 which spurred planting and boosted production, leading to a global glut.

The National Rubber Policy Committee has approved a budget of 30 billion baht to give loans at low interest rates to farmer cooperatives and companies to buy rubber and increase processing, a move that farmers say may not have an immediate impact on prices.