The European Central Bank uncovered its latest anti-deflation artillery on Thursday in a bid to reignite the eurozone economy as anti-austerity demonstrators clashed with police outside the meeting's Italian venue. 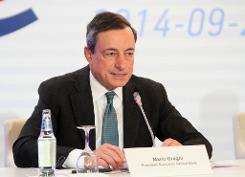 Anti-riot police clash with anti-austerity protesters near the Capodimonte museum during the European Central Bank meeting on October 2, 2014 in Naples

Held in the prestigious Capodimonte museum in Naples instead of its usual venue in Frankfurt, the ECB's governing council voted to keep interest rates at their current all-time lows.

And ECB chief Mario Draghi announced various programmes to inject cash into the single currency bloc's moribund economy, revealing they would be launched later this year.

European stock markets, however, fell after the ECB announcement as investors appeared disappointed at the limited extent of its statement on monetary policy.

Draghi insisted, nevertheless, that the ECB alone could not get the euro area back on its feet and it was crucial that governments press ahead with structural reforms, no matter how unpopular.

"In order to strengthen investment activity, job creation and potential growth, other policy areas need to contribute decisively," he insisted.

"In particular, the legislation and implementation of structural reforms clearly need to gain moment in several countries," he said.

Outside, around 4,000 anti-austerity protestors clashed with police, with water cannon and tear gas used to try and disperse the crowds and police helicopters circling above.

Street protests have repeatedly rocked eurozone countries hardest hit by the sovereign debt and economic crisis, in which the "troika" of International Monetary Fund, European Union and ECB has demanded tough structural reforms and painful budgets cuts from stricken economies.

But Draghi stressed that the ECB was not to blame.

The demonstrators should ask themselves "how the situation was two and a half years ago when the financial system was on the verge of collapse," he countered.

The ECB was not the guilty party in the eurozone's woes.

"We have lowered interest rates so far that they can't go any lower. We have injected unprecedented amounts of liquidity into the system," he continued.

The central bank had fought off a "crisis of systemic proportions".

"This description of the ECB as the guilty party needs to be corrected," he said.

Revealing the latest measures to prevent the eurozone from sliding into a downward spiral of falling prices, the ECB would "start purchasing covered bonds and asset-backed securities (ABSs) in the fourth quarter of 2014, starting with covered bonds in the second half of October," Draghi said.

"The programmes will last for at least two years. Together with the series of targeted longer-term refinancing operations to be conducted until June 2016, these purchases will have a sizeable impact on our balance sheet," he added.

Italian-born Draghi has earned the nickname "super Mario" for his negotiating and communication skills and taken the ECB into unchartered territory in many of its policy decisions since he took over in 2011.

Asset-backed securities are bundles of individual loans such as mortgages, auto credit and credit-card debt which are sold on to investors, allowing banks to share the risk of default and freeing up funds to offer more credit.

The ECB believes that the market for such securities -- an important source of financing for banks to keep lending to small and medium-sized enterprises -- has effectively dried up since the financial crisis.

And the ECB hopes that by buying them on a large scale, it can help revive the market and free up some of the credit channels which have seized up during the long years of crisis.

The problem is that it was precisely complex financial derivatives such as ABS which are seen as the root of the sub-prime crisis in the United States in 2008, leading many observers, particularly in Germany, to harbour deep reservations about them.

"The ECB put flesh to the bones of the asset purchase programmes. However, it did not deliver a single big number and did not go beyond" what it had already said last month, said Berenberg Bank economist Christian Schulz.

"That may come as a disappointment to some observers."

Draghi said the ECB still had other cards up its sleeve if the situation did not improve.

"The governing council is unanimous in its commitment to using other unconventional instruments within its mandate," he said.

And ING DiBa economist Carsten Brzeski believed that, given governments' previous track records in not pulling their weight, it was "a clear signal that the ECB is determined to do more and even bolder action if necessary."