The Board of Investment (BoI) has approved investment applications worth nearly 90 billion baht, mainly for companies making environmentally friendly cars or involved in renewable energy. 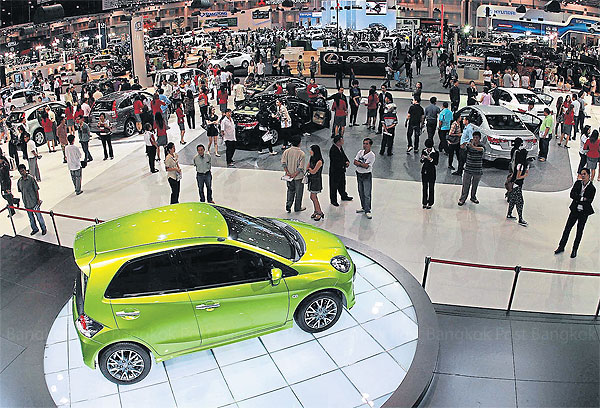 Visitors to the 2010 Bangkok International Motor Show inspect an eco-car. Six projects worth 52.7 billion baht have been approved for the second phase of the eco-car scheme as Thailand hopes to become a hub for environmentally friendly vehicles. NATTHI AMPRIWAN

The investment is mainly for 18 large projects, with six worth a combined 52.7 billion baht slated for the second phase of the eco-car scheme.

Its US peer General Motors will invest 13.1 billion baht to make 158,000 vehicles annually.

Mitsubishi also on Friday asked for the BoI's approval for its plans to expand production capacity granted in the first phase of the eco-car scheme to 220,000 vehicles from a planned 180,000, requiring investment of 7.7 billion baht.

Thailand launched the first phase of the scheme in 2007, attracting investment of 28.8 billion baht from Mitsubishi, Honda, Toyota, Nissan and Suzuki.

Ten car makers including the five existing eco-car manufacturers officially applied in April for the second phase of the eco-car scheme, with total expected investment of 139 billion baht.

The 10 projects are set to produce 1.58 million eco-cars, with investment about 110 billion baht greater than the combined outlay from the five manufacturers in the first phase.

Mr Udom said Thailand's automotive production was expected to reach 2 million vehicles annually over the next three years — 500,000 from the first phase of the eco-car project and 1.5 million from the second phase.

"Although Indonesia is revving up its eco-car production, we expect its production scale is not yet large enough to compete with Thailand's production," he said.

Businessman Chang Hsien-ming will invest 2.45 billion baht in Chon Buri to manufacture 80,000 tonnes of steel parts and 4,000 tonnes of industrial machinery a year, while Thai Asahi Kasei Spandex Co will produce 3,700 tonnes of spandex thread a year worth 1.2 billion baht.

MMTH Engine Co will make 1.19 million plastic parts a year with an investment of 1 billion baht.