The top priorities of the Energy Ministry are to solve the distortion in prices for liquefied petroleum gas (LPG) and compressed natural gas (CNG) and find new sources for the power sector, says Energy Minister Narongchai Akrasanee.

Speaking at a celebration of the ministry's 12-year anniversary yesterday, Mr Narongchai vowed to clean up the mess left by the prolonged energy subsidies of past governments. 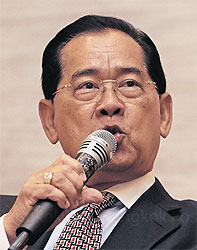 Narongchai: Changes to be made gradually

After the May 22 coup, the military regime pledged to reform energy prices and put all fuel users on a more equal footing, starting with changes in some types of fuel tax collection to result in higher prices for diesel and lower prices for gasohol.

The latest moves include price hikes for LPG and CNG, but Mr Narongchai said these represented just the beginning.

On Tuesday, the Energy Ministry raised transport-sector LPG prices by 62 satang to 22 baht a kilogramme and the CNG price by one baht to 11.50 baht per kg for personal vehicles.

The flotation of gas prices will proceed gradually through next year.

The CNG price will rise by one baht every six months for passenger cars and trucks but retain a cap of 8.50 baht per kg for public transport and taxis.

Apart from natural gas, the gap in retail prices of diesel and petrol is expected to be narrowed.

The cheaper price of diesel has encouraged motorists to modify engines to tap the benefit of subsidies.

"That is unfair for petrol users," Mr Narongchai said.

"Why do they have to pay high tax in order to help diesel motorists enjoy filling their tanks for less than 30 baht per litre?"

Tax and levy collection on diesel comes to 3.07 baht a litre, while on petrol it ranges from six to 16 baht.

Mr Narongchai said any price restructuring would be gradual to allow motorists and natural gas users an adjustment period after a long run of subsidies.

"For instance, for those car owners who invested in modifications to make their engines compatible with diesel, it might be hard for them to handle an immediate hike in cost," he said.

"We will communicate to them that we'll no longer shoulder the burden for them over the next year in order to give them time to prepare for the change."

Clean coal is one possible solution as the country seeks to wean itself from a heavy reliance on natural gas.

"The coal-fired power plant in Krabi province is a pilot project of clean coal technology that must begin development next year," Mr Narongchai said.

The all-embracing mission is to secure future energy supply from both domestic and foreign sources.

"So far, Myanmar and overlapping claim areas between Cambodia and Thailand are our priority zones for new resources," Mr Narongchai said.

Energy permanent secretary Areepong Bhoocha-oom said his ministry had a timetable for its mission under the power development plan (PDP) for 2015-36.

The PDP and a revision of the renewable energy development plan for 2015-36 are scheduled for completion in the fourth quarter.

By next year's first quarter, the Energy Ministry hopes to conclude regulations for third-party access in the gas pipeline business and sign memoranda of understanding with Myanmar and Cambodia to prepare for development of future energy resources.

Mr Areepong said the ministry planned to decide on production concessions held by petroleum explorers by next year's third quarter.

The current concessions are valid until 2022.

Total gas production under them represents 40% of Thailand's gas supply.