Deputy Prime Minister Pridiyathorn Devakula on Wednesday set his sights on boosting Thailand as a trading centre in Southeast Asia, spelling out his plans to achieve the goal. 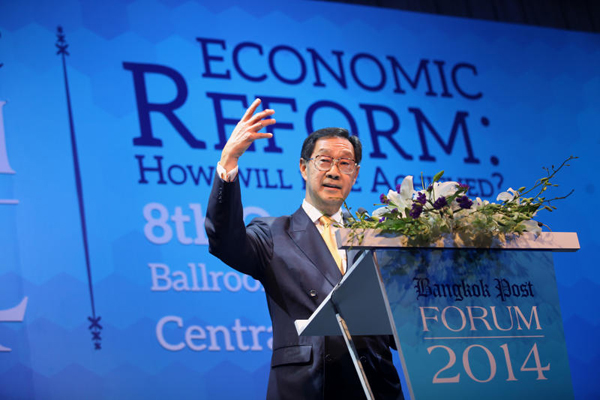 When the region becomes one community under the Asean Economic Community (AEC) in December next year, MR Pridiyathorn said he was confident Thailand could fully tap the benefits of economic integration and more in later years.

"We stand to gain a lot in Asean trade of various consumer products after the full AEC integration at the end of next year," he told the Bangkok Post Forum 2014 on Wednesday night.

MR Pridiyathorn raised the question of why the trading headquarters of companies for products which Thailand champions in the global market are situated outside the country. He said this was because the rules and regulations governing trading companies in Thailand are not as expedient as in Singapore, Hong Kong or Malaysia, both in terms of tax and non-taxes.

“We could easily become the trading nation of the region,’’ added the deputy prime minister, who is in charge of economic affairs.

But MR Pridiyathorn said the private sector could not do it alone as it needed help from the government to set the country up as a firm regional trading base.

Part of the reform process of the government will be geared towards this goal, he added.

The deputy prime minister urged the Board of Investment (BoI) to play a stronger role in promoting overseas investment in Thailand, and said the government will need to change rules and regulations "in the near future".

The rules included the need to make the tax system more competitive with Thailand's rivals, reduce the cost of living, better methods to tackle corruption and improve logistics systems, including the construction of additional deep sea ports on the Andaman Sea, revenue structure and developing the digital economy.

"We need to change all related regulations to accommodate the establishment of trading headquarters in Thailand. I am working on it and should be able to announce the desirable changes in the near future," he said.

"The current government is drafting a law to set up a new policy body governing the digital economy and amending many laws to expand the scope of the ICT (Information and Communication Technology) Ministry and to streamline the functions of all related government agencies in this area," he added.

MR Pridiyathorn said the trading hub plan could not be turned into reality overnight and needed a strong will by the government.

"The whole thing may not be able to be completed within a year, but a serious start with a strong political will could lay a good foundation for this reform and would naturally attract the attention of subsequent governments to continue this development as it is obviously needed to cope with the changing world," he said.