The Government Pension Fund (GPF), Thailand's largest pension provider, estimates 200,000 members with outstanding contributions plus benefits of 40 billion baht will opt out of its membership and return to the previous non-contribution benefit plan. 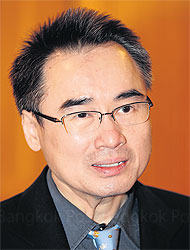 The GPF's investment portfolio will not be affected, says Mr Sombat.

The law governing reinstatement of the non-contribution basis of the pension, allowing state officials who applied to become GPF members before March 27, 1997, to switch to the previous pension benefit plan, is expected to come into effect in December.

The resignation period could run until June next year.

The move came after the Yingluck Shinawatra government agreed in April 2013 to let this group of officials — about 500,000 incumbent officials and retirees who became GPF members before March 27, 1997 — to switch back to the pension system.

The GPF functions like a provident fund for the public sector, with several benefit packages to choose from including monthly pensions and lump-sum payments, or a combination of both.

Officials in office at the time had the choice of sticking with the pension system or switching to the GPF, which promoted itself by promising a hefty return.

However, due to economic volatility over the years, the GPF failed to deliver its promised rate of return and this prompted protests from state officials who opted in.

Mr Sombat believes the GPF will be able to manage its financial liquidity to prepare for the hefty redemption because it has enough money from cash in hand and maturing government bonds.

The GPF also has another 70-80 billion baht invested in overseas stock markets and is able to withdraw part of that sum.

Mr Sombat forecasts that those members who choose to opt out will get redemption in the second half of next year. Most of them are expected to be military officials.

GPF members who joined the fund in recent years are likely to receive better returns than they would have done under the previous pension system, he said.

The GPF has 11.8 million members with combined assets of 600 billion baht.

Yingyong Nilasena, deputy secretary-general of the GPF, said the fund's year-to-date return at 5% is deemed to be a satisfactory level and meets the fund's investment target by beating bank deposit rates plus inflation.

The GPF is expected to have a return of 5% this year.