The Thai economy is likely to grow by 1.6% this year amid falling exports and a bleak tourism recovery, but public investment, domestic consumption and a rebound in shipments should boost next year's growth rate to 4%, says Kasikorn Research Center (KResearch). 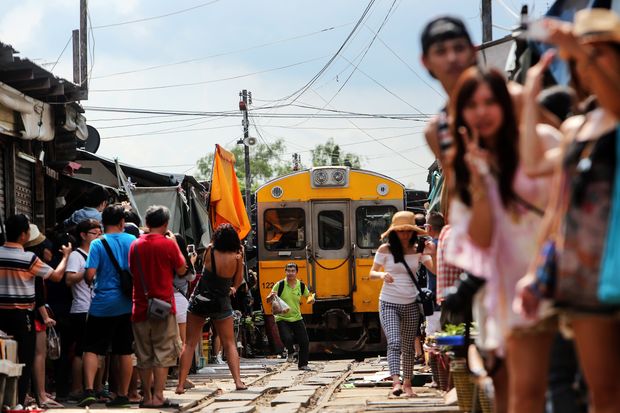 Tourists take photographs of a man running along rail tracks from a train travelling through the Mae Klong Railway Market in Samut Songkhram, on Sept 28, 2014. (Bloomberg photo)

This year's lower forecast is due to an expected 0.3% decline in exports and a 5.8% drop in tourism, said Kangana Chockpisansin, head of macroeconomic research.

And while domestic consumption is expected to rise by 3% in the second half, improving on the first half's contraction of 1.4%, the recovery pace of consumption remains constrained by the consumer debt burden.

The economy shrank 0.1% year-on-year in the first half as domestic political unrest took a toll on confidence.

Exports in the first eight months fell by 1.4% year-on-year to US$151 billion, while tourism dwindled 10.7% as foreign arrivals totalled only 15.7 million.

KResearch's latest growth forecast for 2014 is slightly above the central bank's 1.5% view.

Economic growth is projected at 4% next year, a base-case forecast within a range of 3.5% to 4.5%, as public spending and investments help the recovery to gain steam, Ms Kangana said.

She said a tourism rebound and a recovery in export growth, forecast at 3.5%, were tipped to support a broader economic resurgence.

Potential challenges include the fragile global economic recovery, a shift in the US Federal Reserve's monetary policy and the domestic household debt burden.

That growth is expected to be driven by improved consumer sentiment after the National Council for Peace and Order moved ahead with budget disbursement, economic stimulus measures and additional payments to rice farmers.

The government's recent stimulus measures are seen adding one percentage point to this year's economic growth, but the real multiplier effect is likely to take place next year.

"Household debt could have some effect on domestic spending, and the rate is not expected to decline, but it would be at a slower pace," Mr Charl said.

In a related development, the Bank of Thailand expects household spending to recover continuously as household income improves after a decline in household debt accumulation, said Mathee Supapongse, assistant governor for monetary policy and secretary of the Monetary Policy Committee.

He said clearer public policies had enhanced private-sector confidence, the employment outlook and non-farm incomes, adding to prospects for a recovery in household spending.

But it could take time for household spending to normalise, as household debt remains at a high ratio and low farm prices could make some households wary of spending on durable goods.