The project will be its fifth pipeline to serve the constantly increasing demand for gas in the future, says chief executive and president Pailin Chuchottaworn. 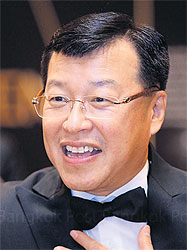 "Our four gas pipelines are operating at nearly full capacity, so we have to prepare for the new one since construction will take years," he said.

Details of the new pipeline have yet to be finalised as the company is waiting for the results of the feasibility study.

The project would also need to meet the requirements of the state's power development plan (PDP).

However, he said that it would probably be routed to link with pipelines carrying gas from Myanmar in order to secure gas supply in the future.

"We have to see the plan concerning what percentage of gas we will use for generating electricity in the future under the new PDP, which is being revised by energy policymakers," said Mr Pailin.

The new PDP is expected to revise the proportions of fuel usage, which currently relies heavily on gas, to focus on imported coal and nuclear power.

Chief operating officer Nattachat Charuchinda said PTT was also waiting for the concrete plan from the Energy Regulatory Commission on the policy to spin off the group's pipeline business.

"It is still unclear whether PTT is able to invest in the pipeline project, or whether it has to be done by the new company only," said Mr Nattachat.

The government decided to spin off the pipeline business by setting up a new company that will have the Finance Ministry and PTT among its shareholders. The plan has yet to be finalised.

Mr Nattachat said that under the PTT's business plan the new gas pipeline project was essential to serve the second phase of the liquefied natural gas terminal, which is also prepared to serve future demand.

The second phase of the LNG terminal will double the capacity of gas retrieved to 10 million tonnes per year.

"We will know the investment value of these projects after the PDP is done," said Mr Nattachat.

Walls close in on poorest as virus shrivels economy

Shuffling around their tiny slum home which is too small to stand up in, Thanapat Noidee and his wife Papassorn share donated noodles with their sons and worry about bills, as the coronavirus pushes Thailand's poor deeper into penury.