The government plans to allocate 8.67 billion baht from 2014 to 2017 to promote development based on His Majesty the King's sufficiency economy philosophy in 19,000 villages.

"Income disparity is admittedly the main problem in Thai society, and this government is committed to sorting out this problem, particularly using the principles of His Majesty the King's sufficiency economy philosophy for farmers and the poor," said Prime Minister Prayut Chan-o-cha. 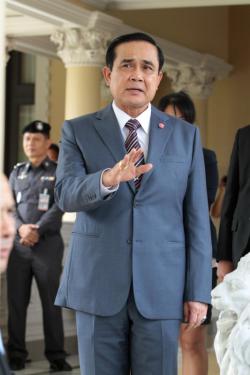 "All related state agencies and companies are thus required to work together on how to help low-income earners and farmers out of this plight."

One key partner includes the Pid Thong Lang Phra (doing good without any intention to get anything back) Foundation, a royally sponsored initiative that specialises in rural development using the sufficiency philosophy.

The planned 8.67-billion-baht budget would mainly come from the remainder of the Sufficiency Economy Fund established by the Abhisit Vejjajiva government. The incumbent government is expected to quickly set up a new committee to be chaired by the premier himself to supervise this initiative.

Under the new initiative, the Agriculture Ministry will be instructed to strengthen existing agricultural cooperatives, as they are regarded as a vital tool to raise farmers' income.

The government also vowed to rearrange its existing land plots nationwide in order to allow landless farmers to grow crops.

"Today's focus is to talk about farmers' income, farmland and water management, as well as to underline cooperation among the government, private and local community sectors," said Gen Prayut. "All parties need to work together to reform the country and move forward for social and economic development."

He said yesterday the government was in the process of conducting Thailand Strategy 2025, using sufficiency economy principles as a guideline.

The Industry and Commerce ministries will be required to support processing of agriculture products and enlarging market access, said Gen Prayut.

Around 500 listed companies have engaged in supporting the development projects run by the Pid Thong Lang Phra Foundation.

MR Disnadda Disakul, secretary-general of the Pid Thong Lang Phra project, said the 19,000 villages accounted for only 25% of all villages in Thailand, but the project would expand to cover more areas in the future.

MR Disnadda said the premier also expressed his particular concern about water availability next year, as Thailand, the US and China are all expected to see drastic water shortages in 2015 because of climate change.