Tourism and Sports Minister Kobkarn Wattanavrangkul should focus on structural reform and upgrading the entire tourism industry, a leading hotelier has urged.

This is because the industry has many chronic problems that are hindering its growth, says Chanin Donavanik, chief executive of the Dusit International Group. 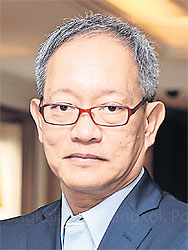 Chanin Donavanik, chief executive of the Dusit International Group, has called for upgrading the tourism industry.

The minister should give priority to restructuring the tourism industry because her term of service is only for one year, he said. Ms Kobkarn should let other tourism agencies handle marketing and other minor activities.

"For instance, the minister should let other organisations such as the Tourism Authority of Thailand handle the marketing and the Tourism Department should take care of the development of tourism sites," said Mr Chanin.

"We put hope in this government because it is almost impossible with an elected government," he said.

Meanwhile, it is essential for the industry to be upgraded as it cannot stay competitive under the existing discount tourism approach.

"We should boost spending per head while maintaining the number of arrivals in order to preserve existing natural resources that are limited," Mr Chanin said.

"Actually, the country can sell what it possesses at a higher price but that is likely to take time and effective restructuring," he added.

He said that if the number of tourists continued to increase by 10% per year, major tourist destinations and natural resources may not be able accommodate the huge numbers.

He also believed community tourism must be promoted to relieve overcrowding in main tourism sites.

Existing hotel room rates, he continued, are low compared with other popular countries such as Japan and France. The number of hotel rooms in these countries is high but they can still quote very expensive rates. The key reason is their good tourism structure, while visitors are willing to pay more because of the high quality.