In a bid to stimulate border trade, the Thai Chamber of Commerce (TCC) is teaming with its Myanmar counterpart on a master plan for the proposed special economic zone (SEZ) in Tak's Mae Sot district. 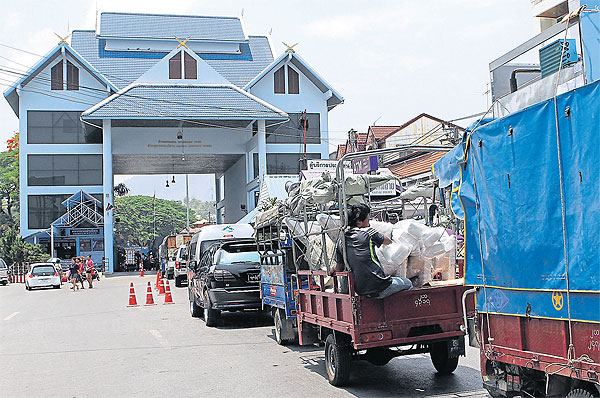 A convoy carrying goods from Thailand approaches the Myanmar border checkpoint in Chiang Rai’s Mae Sai district. The northernmost district is one of several under consideration for a special economic zone. PATTARAPONG CHATPATTARASILL

TCC vice-chairman Somkiat Anurat said the two parties yesterday agreed to set up an SEZ joint committee to handle the master plan and ensure Mae Sot was developed into an integrated zone that took into account regulations, worker mobility and goods transport.

A comprehensive SEZ will attract more investment and trade between the two countries, he said.

In Mr Somkiat's estimation, the master plan for the Mae Sot SEZ will take six to nine months to complete.

"As far as we've discussed with the National Economic and Social Development Board, the SEZs should combine myriad features, not just a trading venue but also an industrial zone and tourism destination," he said.

"Mae Sot is a perfect match for developing such an SEZ."

The master plan will explore the feasibility of incorporating two other districts in Tak into the planned SEZ — Mae Ramat and Phop Phra.

Mae Sot was chosen in July by the National Council for Peace and Order for development of an SEZ.

The exact locations, benefits and incentives of the prospective zones remain to be worked out.

At yesterday's joint meeting, officials from Thailand and Myanmar discussed the suitability and potential of various locations for hosting future SEZs.

Thailand's border trade with Myanmar is expected to grow by 10% this year from 197 billion baht last year.

The increase will be driven by bustling activity in Mae Sot, where border trade is expected to surge 30% this year from 43.7 billion baht in 2013.