"We expect a ratio of 85% of GDP at the end of this year, and it could reach 86-87% next year [based on an assumption of 4.8% economic growth]," said managing director Charl Kengchon. 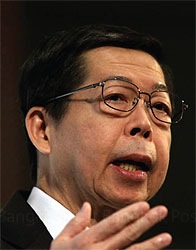 A good economic recovery could prompt people to start spending more with credit cards, while financial service providers would expand credit access for clients, he said on the sidelines of the Bank of Thailand Symposium 2014 under the theme of "Rethinking Finance for Sustainable Growth".

Household debt rose to 10 trillion baht or 83.5% of GDP in the second quarter from 9.87 trillion or 82.7% in the first quarter. Economists believe ballooning household debt has weakened domestic consumption and slowed the economic rebound.

The current household debt ratio is quite high but not unusually so, as it does not exceed the 100% threshold, said Mr Charl, citing higher figures of 86-87% in Malaysia, 90% in South Korea and more than 90% in the US when its economy was in good shape.

KResearch projects interest rates will gradually put pressure on the household debt burden. However, the US Federal Reserve may not raise its interest rate next year amid global economic uncertainty, or it could hike the rate by minimal basis points.

"Pressure on households' debt burden will occur when interest rates reach their peak, but that's two or two-and-a-half years from now, so the short-term effect should not be substantial," said Mr Charl.

He said access to financing had improved, but integrating people who obtain loans from informal sources into the formal system remained a problem.

Bank of Thailand governor Prasarn Trairatvorakul said debt problems related to informal lending should not be resolved by low-interest loans but by generating earnings, enhancing savings and financial planning. It is impossible to get rid of informal lending, as some people have no access to formal loans.

"Turning to low-interest loans can be compared with taking a painkiller medicine, which is only a short-term solution, but if we focus on generating earnings, then this would ease excessive lending and improve savings," he said.

Mr Prasarn said arguing whether the government's recent cash distribution to low-income farmers was a populist policy was not helpful, as the government had to address this issue on a short-term basis, and direct payments did not distort market forces.