Companies participating in government auctions may soon be required to meet criteria for anti-corruption practices set by the Collective Action Coalition against Corruption (CAC).

"Companies joining government auctions should comply with CAC criteria, and these could even be set as a bid qualification," Finance Minister Sommai Phasee told a seminar hosted by the CAC yesterday. 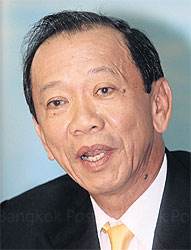 The move is part of scaled-up government efforts to clamp down on corruption after Thailand's ranking on Transparency International's corruption perceptions index (CPI) slipped 14 spots to 102nd out of 177 countries last year from 88th in 2012.

Awareness of fighting corruption is also rising among the private sector, as seen by 60% of listed companies setting anti-
corruption practices as a priority.

The Thaipat Institute's 2013 assessment of listed companies' anti-corruption measures showed that 344 of 567 firms listed on the Stock Exchange of Thailand and the Market for Alternative Investment placed priority on anti-corruption practices, while 19 of them had been certified by the CAC.

The CAC was initiated in 2010 with the aim of fostering awareness of corruption risks among the private sector and the need to resist and fight corruption through the implementation of policies and effective mechanisms to prevent corruption at the company and industry levels.

To date, 362 businesses including 179 listed companies have declared their intention to comply with CAC criteria.

However, only 78 companies have been certified by the CAC.

Mr Sommai said it would be deemed a success once Thailand's CPI ranking improved to 75th place, but of course it would be a failure if the ranking continued to fall.

Prime Minister Prayut Chan-o-cha is determined to tackle corruption, he said, adding that he had always told foreign investors a crackdown on corruption would prove the government's accountability.

Govt maintains land and building tax for another 2 years