The planned 2.4-trillion-baht infrastructure megaprojects are unlikely to affect public debt much, as the investment should help to drive economic growth of at least 4% a year over the next eight years, says the Public Debt Management Office (PDMO). 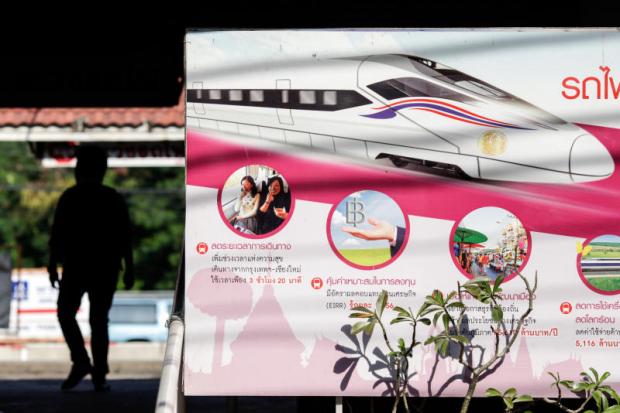 An advertisement for high-speed trains is seen at Laksi train station in Bangkok. The government is trying to stimulate the economy by approving an infrastructure investment plan that includes construction of new railways, mass-transit systems in the capital and nationwide highways. (Bloomberg photo)

"The massive investment may pile pressure on the country's public debt to a certain extent, but it should propel economic growth to at least 4% a year, with inflation estimated at 3%," said director-general Kritsda Udyanin.

"We believe the economic growth rate will outpace the rise in public debt."

Mr Kritsda said if Thailand could maintain average GDP growth of 4% a year, public debt was unlikely to exceed 50% of GDP during the investment period.

The Finance Ministry is committed to maintaining public debt at 60% or less of GDP. As of August, public debt stood at 46.5% of GDP.

If Thailand's economy grows by 4% per year with 3% inflation, at the end of the eight-year infrastructure investment plan the country's GDP is expected to rise by 60% from 12.2 trillion baht now, Mr Kritsda said.

Funding for such massive development projects will stem from various sources including the fiscal budget, state enterprise revenue, public-private partnerships and borrowing.

For fiscal 2015, which started this month, the regime approved new borrowing for the government and state enterprises of 380 billion baht, with 99 billion slated for investment in infrastructure development projects.

The PDMO set borrowing at 1.4 trillion baht for this fiscal year, while maximum public debt to GDP is forecast at 47.1%.

Of that amount, 380 billion baht will be new borrowing by the government and state enterprises, 250 billion to offset the budget deficit and the rest for other purposes.

Authorities are trying to trace people who came in contact with the latest Covid-19 fatality, a 57-year-old man who had returned from Pakistan and died travelling on a southbound train on Monday night.

Starting Saturday, employees of Thai Airways International will cease work and take a pay cut, according to the national carrier.