Petroleum concessions up for bidding
Business

Petroleum concessions up for bidding

The government plans to auction new petroleum concessions for 29 onshore and offshore blocks next February, expecting to draw investment of 5 billion baht over the next three to five years. 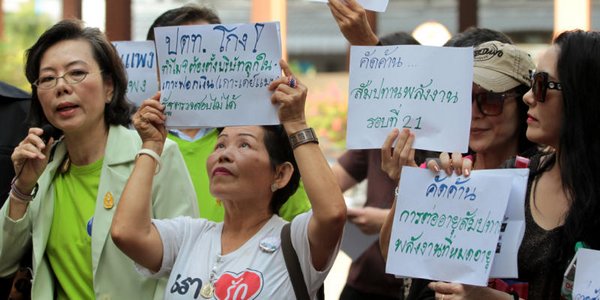 Activist Kamolpan Cheewapansri (left) had an anti-exploration protest going literally within minutes of the announcement on Wednesday that the government will open 27 new concessions to petroleum firms. Photo shows a protest last week after Ms Kamolpan first heard rumours of the new exploration bids. (Photo by Chanat Katanyu)

The National Energy Policy Committee, chaired by Prime Minister Prayuth Chan-o-cha, on Wednesday approved the Energy Ministry's proposal to open a new round of bidding for petroleum concessions in its effort to secure energy supplies.

The decision to approve the concessions was made while a group of protesters, led by well-known activist Kamolpan Cheewapansri, held a rally near Government House.

The group delivered a petition to Gen Prayut, urging him to scrap the concession plan and raise prices for diesel, liquefied petroleum gas and natural gas for vehicles.

The junta did not attempt to halt the protest, and did not explain why it tolerated the illegal gathering of more than five people, along with a similar demonstration last week, also led by Ms Kamolpan.

The new bidding round, the 21st, will be the first since 2007, with the political crisis partly responsible for the interruption in auctions.

He insists the government has tried its best to stay away from environmentally sensitive areas such as national parks, major tourism destinations, wildlife sanctuaries and Class A watershed areas.

Of the 29 blocks up for auction, six are offshore in the Gulf of Thailand and 23 onshore, mostly in the Northeast.

The blocks on offer will allow Thailand to tap an estimated volume of 1 to 5 trillion cubic feet of natural gas and 20-50 million barrels of crude oil.

This would bring in at least 5 billion baht in new investment and add more than 20,000 new jobs in petroleum production and exploration as well as related industries, he said.

In the new bidding round, the government also approved benefit-sharing conditions on a Thailand III Plus basis.

Unlike the previous basis, called Thailand III, the new one will feature additional benefits.

These will include a royalty fee charged at a rate of 5-15% of petroleum sales, income tax at a rate of 50% of net profit and a special remuneratory benefit, a windfall profits tax to be imposed if all capital costs are recovered and annual revenue becomes drastically high compared with the investment.

Other requirements include calls for supporting educational and local products and services.

The Energy Ministry originally planned the new round in June, with 16 of 27 blocks in the Northeast.

Mr Kurujit said Thailand was at risk of an energy crisis or might need to import more energy if the country failed to provide new reserves.

The country's natural gas is expected to be used up in the next six to eight years if there are no new supplies, forcing the country to rely on imports, he said.