Commercial banks set aside more money for rising bad loans over the first nine months in a prudent move, while more provisions are expected in the final quarter amid the anaemic economic turnaround. 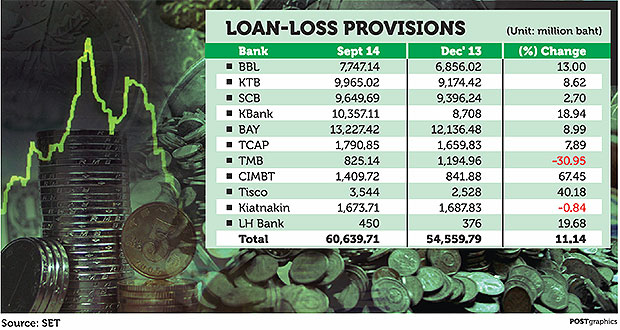 TMB, the country's seventh-largest lender by assets, divested 3.3 billion baht worth of its non-performing loans (NPLs) in the second quarter.

At the other end of the scale, CIMB Thai Bank (CIMBT) set aside the highest provisions in terms of percentage. It used 1.41 billion baht for bad loans, a 67.45% surge from the end of December.

Bank of Ayudhya set aside the highest amount among its industry peers at 13.23 billion baht or 8.99% up from the end of last year.

Kiatnakin Bank showed the largest percentage increase in outstanding NPLs, which soared 43.94% to 10.48 billion baht, while Krungthai Bank saw the biggest rise in its NPL amount of 67.46 billion, up by 11 billion baht or 19.50%.

Mr Narongchai said the bank aimed to keep its NPL ratio at about 3% by the end of this year and may sell off its bad loans. CIMBT disposed of some NPLs in 2012 but has since managed distressed loans by itself to retain its customer base.

"Potential resumption of NPL divestment is under consideration regarding business expansion opportunities, capital savings and reserve burden reduction," he said.

Jesada Techahusdin, an analyst at Maybank Kim Eng Securities (Thailand), said banks were expected to set aside additional loan-loss provisions in the final quarter. However, bad loans are expected to be stable this quarter, while lending could improve from the previous quarter on the back of better signs of economic recovery.