Siam Cement Group (SCG) was listed as the industry leader for building materials in the 2014 Dow Jones Sustainability Index (DJSI) for the fourth year in a row and the country's largest industrial conglomerate is urging other Thai companies to join the scheme because it improves its credibility among long-term investors. 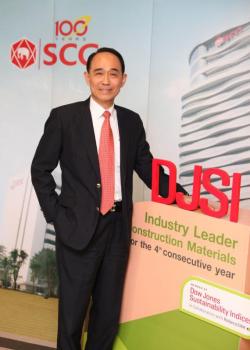 SCG chief Mr Kan says Thai companies are missing out on a chance for recognition and to improve by not listing on the Dow Jones Sustainability Index.

"If Dow Jones invites your company, join in. Being listed on the DJSI lets investors know something immediately about your company's values," said president and chief executive Kan Trakulhoon. The DJSI has helped SCG partner with the world's leading companies, he added.

The DJSI is the world's first index tracking the sustainability performance of listed companies, assessing them in three areas: economic, social and the environment. It invites large free-floating market capitalisation companies annually, and those who accept must allow DJSI to assess their operations.

The index categorises members by sectors and regions. Thailand is categorised as an emerging market.

"It is helpful to have DJSI assess you for free, as it guides us on what we can improve on," said Mr Kan.

SCG has also been in the gold class for seven consecutive years in other sectors.

Numpol Limprasert, a sustainable development manager of SCG, said it was invited to join the DJSI in 1999. Last year 3,395 companies were members from 59 industries such as oil & gas and petrochemicals.

Siam Cement (SCC) shares closed on the SET yesterday at 434 baht, up two baht, in trade worth 295 million baht.