Thailand's world ranking for ease of doing business has improved from 28th to 26th this year. 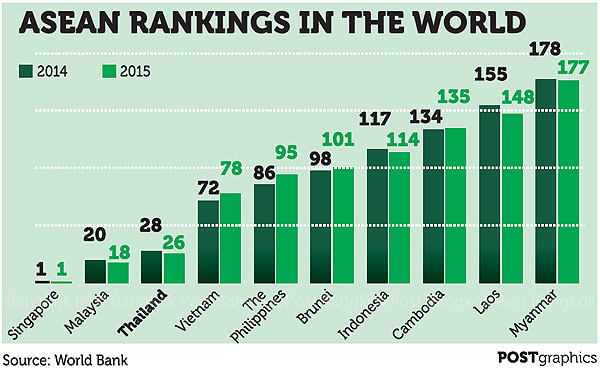 One main contributor is the procedure put in place to fast-track approvals for construction permits for developing small commercial buildings, the World Bank said.

Constantine Chikosi, the bank's portfolio and operations manager for Cambodia, Laos, Malaysia, Myanmar and Thailand, said the country's ranking had moved up two places from last year in the "Doing Business 2015: Going Beyond Efficiency" report because it had decent rankings for construction permits, obtaining electricity, protecting minority investors and enforcing contracts.

"Over the years, Thailand has been implementing reforms directly intended to improve the provision of public services such as trading across borders and dealing with construction permits," he said.

The introduction of an electronic interface for cross-border trade enhances online communication and removes corrupt practices, reducing the time required for exports and imports to 18 and 13 days from 24 and 22 days, respectively, said Mr Chikosi.

"During the last 12 months, Thailand has implemented one specific reform that has been recognised this year, and that is fast-track approval processes for building permits for small buildings," he said. "This is one of the reasons why Thailand moved up."

The ranking for aggregate ease of doing business covers 10 areas of regulations and 189 economies. However, the report does not measure all aspects of the business environment that matter to firms and investors such as macroeconomic stability, corruption and labour skills.

In a comparative context, Thailand has accomplished only one reform measure in the past 24 months, while Vietnam has achieved 23 reforms, Indonesia 22 and China 20, said Mr Chikosi.

He said while these countries were not ranked more highly than Thailand, it showed the intensity of their business reforms.

Thailand could improve in areas related to getting credit, paying taxes and starting a business.

Although the country has established the National Credit Bureau, the organisation is a private entity, so it is recommended that Thailand consider creating an additional credit bureau as a public agency in line with most countries, Mr Chikosi said.

The World Bank has assessed that Thailand's credit registry coverage per adult is zero due to the absence of a public credit bureau.

Indicators of countries' rankings on ease of doing business can be indirectly affected by political instability, said Rita Ramalho, manager of the World Bank's Doing Business Unit, citing how the Syrian conflict had a big effect on the logistics of cross-border trade last year.