Digital economy: Out of middle-income trap

The government has mapped out a draft action plan for a digital economy with the ultimate goal of almost tripling Thailand's GDP per capita and lifting the country from the middle-income trap.

Under the plan, conducted by a working group chaired by Deputy Prime Minister MR Pridiyathorn Devakula, the country's GDP per capita is set to rise from US$2,000 to $7,000 over the next few years after the digital economy strategies are implemented in January 2015. 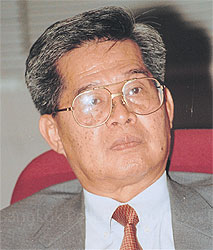 Kosol: Drive to have a national digital economy committee by January

Kosol Petchsuwan, one of eight members working on the digital economy policy, said the government was on the verge of amending a series of laws and regulations in a major drive to create a national digital economy committee by January.

The working group was set up on July 21 this year by Deputy Prime Minister Gen Prawit Wongsuwan.

A policy blueprint for a digital economy was initiated by a committee working on ICT business at the Thai Board of Trade in 2013, which proposed its study result to the digital economy working group.

Mr Kosol said the draft action plan was designed to strengthen the functionality of all existing ministries and agencies as well as enhance the competitiveness of the private sector.

"Enhancing the synergy between organisations, both private and government, can lead to sustainable growth," he said.

Mr Kosol said this government's idea of a digital economy was a departure from previous concepts in the literature over past decades, which were primarily tied to ideas being embedded in an information or network economy.

"Our digital economy will be anchored to shifts in technology in six core business areas that rely heavily on the internet. They are telecommunications, broadcasting, IT, digital content, e-commerce and digital marketing," he said.

Last year these six groups, excluding the electronics sector and other ICT-related businesses, generated a combined market capitalisation of 1.2 trillion baht, or 10% of GDP.

Mr Kosol said a plan for the first phase of the blueprint's implementation was under way, including constitutional amendments and changing five acts and four royal decrees. (see graphic).

The five acts to be amended include the Frequency Allocation Act, E-Commerce Act and Computer Crime Act.

He said the government also needed to draw up a new law governing digital economy operations. Another two ministerial regulations will be created to oversee the ICT-related state agencies under the new Digital Economy Ministry.

"The amendments and new laws are expected to take effect in January," he said.

Mr Kosol said the ICT Ministry would be renamed the Digital Economy Ministry after the law becomes effective early
next year. The ministry will set up a new department responsible for digital economy tasks.

The National Statistical Office, now under the umbrella of the ICT Ministry, would be transferred to become a unit under the Office of the Prime Minister.

TOT Plc, CAT Telecom, Thailand Post, the Electronic Government Agency, the National Science and Technology Development Agency and the Software Industry Promotion Agency will fall within the scope of the Digital Economy Ministry.

The National Broadcasting and Telecommunications Commission, which was established under the 2007 Constitutional Act, will only be in charge of allocating spectrum and issuing licences, enhancing competition and controlling service quality and tariff prices.

"We are not here to solve existing chronic problems at state agencies," he said, adding ailing state enterprises need to fix their problems on their own under the government's directions. 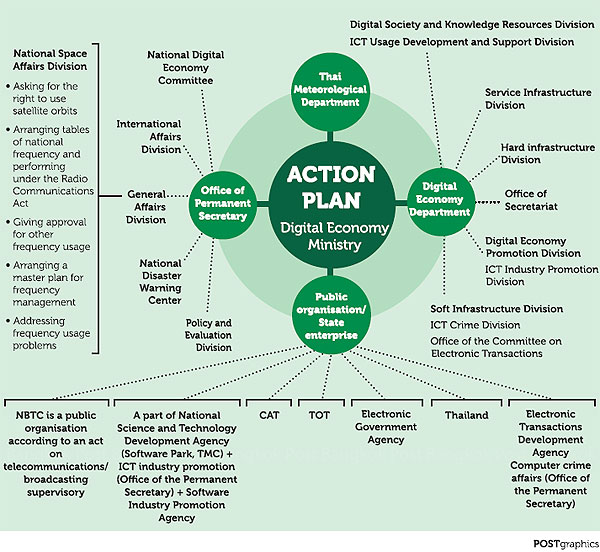 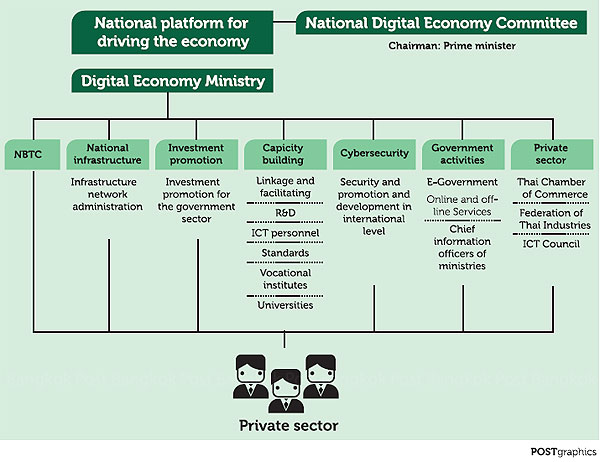