The Bank of Thailand has signalled it is ready to cut the policy interest rate if economic growth is lower than expected, an increasingly likely scenario as more data are unveiled. 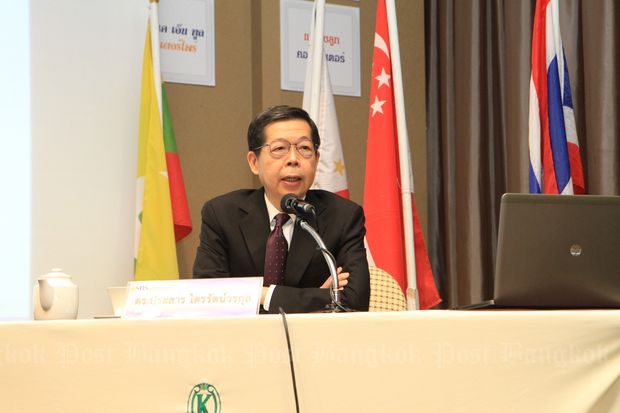 Thailand can no longer count on exports to drive growth, says Mr Prasarn at a seminar on the Asean Economic Community on Tuesday. (Photo by Sunthorn Pongpao)

Governor Prasarn Trairatvorakul said on Tuesday it was necessary to ease the monetary policy given the economic recovery was slower than expected.

Exports have slowed down while tourism has come short of expectations so it makes sense to shield the economy from more shocks for long-term stability, he said.

"But the current interest rate at 2% is already accommodative," he said.

"We can't count on exports for growth anymore because they no longer increase by two digits. In fact, half of the single-digit range is already outstanding.

"This year, exports may contract. Over the next two years, we'll likely have to rely on the local economy."

Growth this year may miss the 1.5% projection and next year's 4.8% forecast might be far-fetched as well, he said.

"That's why everybody is so keen about AEC," he said.

Australian banks have 'too much money', more may be on the way