Myanmar labour law to be revised

WASHINGTON — Japan and the United States have agreed to help Myanmar improve its labour law in a multiyear project aimed at removing obstacles to foreign investment in the Southeast Asian country, sources familiar with Japan-US relations said Thursday. 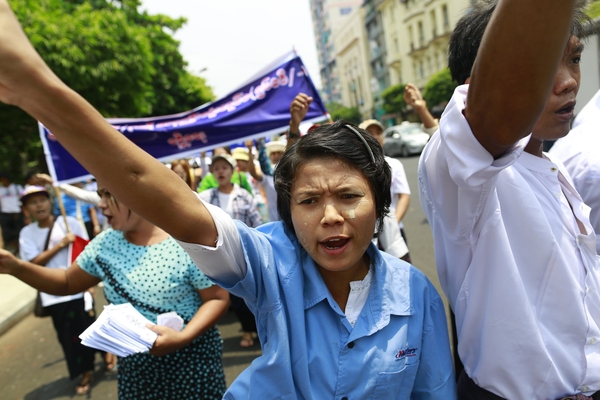 Members of the Myanmar Labour Union march during a May Day protest in central Yangon on May 1, 2014. Japan and the United States have agreed to help Myanmar to revise its labour law. — Reuters

Under the project that will run for three to five years with the help of the International Labor Organisation, Tokyo and Washington will send experts to support labour law revisions and help set up a dialogue framework between the Myanmar government, employers and workers for the protection of laborers' rights, the sources said.

Denmark and other European countries have expressed support for the project called "initiative to promote fundamental labour rights and practices in Myanmar" and may join it, the sources said, adding a joint statement with the Myanmar government on the project could be released on Friday.

Myanmar's labour-related legislation is said to be largely ineffective and has been an impediment to potential investment by many foreign businesses.

The envisioned initiative is part of a Japan-US bid to help economic development in Southeast Asia and aimed at helping the government of Myanmar President Thein Sein advance democratic reforms.

The US government sounded Japan out about participating in the project as Tokyo has already made contributions to law-making efforts in Myanmar in such fields as corporate law and intellectual property protection, according to the sources.

BEIJING: Efforts to save 22 miners trapped hundreds of metres underground for two weeks in east China have sped up dramatically, as rescue workers lifted out seven people on Sunday and hope to reach more, state media reported.

WASHINGTON: With a new year and a new administration in the White House, the US central bank nonetheless faces an unprecedented challenge in guiding the post-pandemic economic recovery.

PHUKET: Two men were shot dead by a colleague at the 2nd bus terminal on Thep Kasattree road in Muang district on Saturday night, police said.

Miami's successful pitch to tech firms: How can we help?