Monica Topliss pauses while eating breakfast in her Bangkok hotel to explain why she flew 7,300 kilometres from her home in Australia to go under a Thai plastic surgeon’s knife. 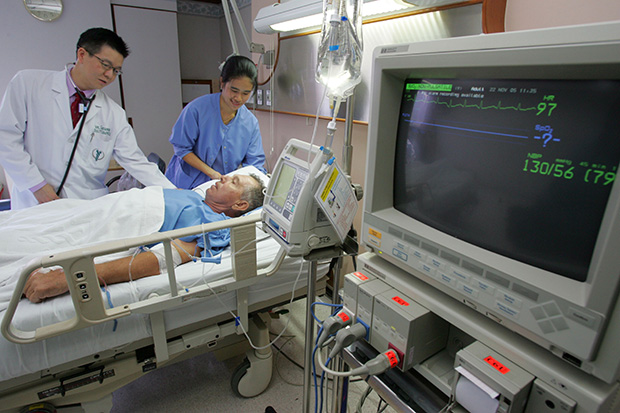 Foreigners seeking treatment for everything from open-heart surgery to gender reassignment have made Thailand the world’s No 1 destination for so-called “medical tourism,” luring as many as 1.8 million overseas visitors in 2013. (Bangkok Post photo)

"The whole thing, airfares and hotel included, cost me AU$15,000 (428,000 baht), when back home, it would have been twice as much," Ms Topliss, a 48-year-old executive chef and author of cookbooks, said of the breast-enhancement procedures and cosmetic dentistry she has just undergone. "And the surgeon did such a good job. It's like the clock has been turned back 20 years. What's more, I'm having a wonderful two-week holiday as well. Even the hospitals are like five-star hotels."

Come for the gold-spired temples and sun-kissed beaches; stay for the low-cost, US-accredited medical services. Or vice versa. That's the "Land of Smiles" today. Foreigners seeking treatment for everything from open-heart surgery to gender reassignment have made Thailand the world's No 1 destination for so-called "medical tourism," luring as many as 1.8 million overseas visitors in 2013, according to Patients Beyond Borders, a consulting firm based in the US state of North Carolina.

That ranks Thailand, a developing nation with a per capita gross domestic product of just $5,700, ahead of the US - and also Thailand's more prosperous Southeast Asian neighbours, Singapore and Malaysia - as the preferred destination for international patients. Last year, medical tourists pumped as much as $4.7 billion into the Thai economy, according to government statistics. "While the US is still first choice for the ultra-rich, Thailand is unquestionably No 1 among everyone seeking affordable care," Patients Beyond Borders founder Josef Woodman says. 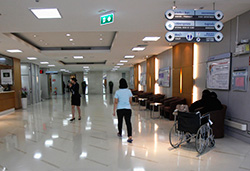 People walk inside Bangkok Hospital May 19. Despite the military coup that took place three days later, tourists continue to flock to Thailand for medical services, with as many as as many as 1.8 million overseas visitors coming for the beaches and staying for the hospitals in 2013. (Reuters photo)

A gauge of 15 Thai hospital stocks, boosted by medical tourism, leapt 54% in 2014 as of Nov 18. Among the prime beneficiaries of these soaring valuations are three of Thailand's billionaire dynasties.

They include the family of the late Chaleo Yoovidhya, who in 1987 co-founded Red Bull GmbH, the world's biggest energy-drink company, with Austrian billionaire Dietrich Mateschitz. The media-shy Yoovidhyas, whose 51% stake in Red Bull is worth about $10 billion, according to the Bloomberg Billionaires Index, own Bangkok's Piyavate Hospital, where Ms Topliss underwent her breast surgery.

"Hospital operators are among our top picks," says Peerapong Jirasevijinda, who helps manage $15 billion at Bangkok-based BBL Asset Management Co. "We are still really upbeat even though they have rallied so much recently."

The Thai military, which has staged 12 coups since 1932, hasn't always inspired such confidence in investors. After the previous putsch, in 2006, the junta briefly imposed capital controls, prompting fund managers to dump stocks. This time, investors have been betting that the current crop of generals, led by army chief-turned-Prime Minister Prayut Chan-o-cha, will get it right.

Amid such challenges, medical tourism is one industry in which Thailand can compete - on services, prices and style. Patients flying into Bangkok's Suvarnabhumi Airport are greeted at special arrival desks before being whisked to hospitals where, in grand hotel-type lobbies, English-speaking concierges, as well as interpreters skilled in some 30 other languages, shepherd them to private rooms.

Once discharged, patients can recuperate in five-star hotels that charge as little as $100 a night. Medi Makeovers, a Sydney-based medical-travel agency, is now the biggest corporate customer of Bangkok's 500-room Grande Centre Point Hotel Terminal 21, according to Somchai Meesri, the hotel's general manager. 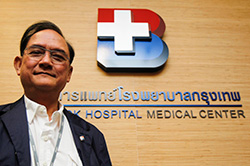 Chatree Duangnet, chief operating officer at Bangkok Dusit Medical Services Pcl, poses at Bangkok Hospital in this May 19 file photo. Bangkok Hospital is one of 30 facilities in Thailand to win accreditation from the Joint Commission International, the global arm of the main standards-setting body for US hospitals. (Reuters photo)

"They take 10% of our rooms, ahead of Japanese clients such as Toyota and Honda," says Mr Somchai, whose hotel is owned by Land & Houses Pcl, Thailand's biggest residential-property developer. Medical tourists also stay longer, resting up after their procedures. "The average stay for other guests is three nights," Mr Somchai says. "For medical tourists, it is ten."

Though Thailand has long aspired to medical excellence - HM the King's father graduated as an MD from Harvard University in 1927 - it wasn't until 1997 that it began to tap a global market. That year, Bumrungrad opened the 500-bed Bumrungrad International Hospital with money borrowed in US dollars.

Six months later, Thailand was at the epicentre of the Asian financial crisis. The Thai baht collapsed along with the domestic market for premium private hospital care. "Our US-dollar debt doubled on a local-currency basis," says Chai Sophonpanich, Bumrungrad's chairman.

In desperation, the hospital began to woo wealthy foreigners and expatriates living in nearby Asian countries, where medical services were less developed. Then, after the Sept 11, 2001 attacks in the US, a new market in the Middle East opened up.

"Patient flow increased as a result of more-stringent immigration policies by the USA and European countries for Middle East travellers," Mr Chai said. Within a decade, the number of Bumrungrad's Middle Eastern patients leapt to 130,000 a year from 20,000. In 2002,

Bumrungrad became the first hospital in Asia to win accreditation from the Joint Commission International, the global arm of the main standards-setting body for US hospitals. Since then, 29 more Thai hospitals have also received that accreditation, including Bumrungrad's main rival, Bangkok Hospital, the flagship of Bangkok Dusit.

Last year, Bumrungrad attracted 250,000 medical tourists, including 20,000 Americans and 8,000 Australians. Three weeks after paying $7,500 to have her nose reshaped and breasts enhanced in Bangkok, Australian Calli Graham sips coffee beside Sydney's Bondi Beach and declares herself content. "It's the best money I ever spent," Graham, 30, says. "I got fantastic treatment and the satisfaction of knowing I am helping the economy of a developing country. It's a win-win."