New mass-transit lines will help to cool a surge in land prices in locations near existing stations, making residential units in Greater Bangkok more affordable, a property seminar has heard. 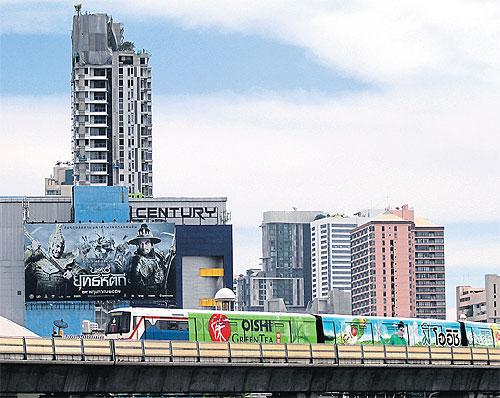 Land prices in locations near mass-transit lines have soared 9-10% on average this year and last year. New lines are expected to help cool the surge in locations near existing stations, making residences in Greater Bangkok more affordable.Thanarak Khunton

Tritecha Tangmatitham, deputy managing director of SET-listed developer Supalai Plc, said people in the mass market or middle-income segment could barely afford housing, as the cost of residential development rises by 8-9% per year.

"People's salaries are increasing by only 4-5% per year, but land prices in locations near existing mass-transit lines have soared 9-10% on average this year and last year," he said.

"The government's new property tax is expected to drive landlords to dispose of their land banks, while new mass-transit lines will present new residential locations," he told the seminar yesterday.

Soaring land costs in the inner city near skytrain and subway lines were cooled by the announcement in 2010 of the Purple Line's development.

"This will be the first time a mass-transit line [the Purple Line] will run out of the inner city [to Nonthaburi]," Mr Tritecha said.

"Once the line expands, there will be many more choices for middle-income people to afford a housing unit."

A labour shortage that caused a 7% increase in labour costs has also pushed up development costs. More affordable small condo units have been built.

"If there are no new mass-transit lines, middle-income earners will find it more difficult to find an affordable home, as land prices along existing lines will be higher," Mr Tritecha said.

Prasert Taedullayasatit, president of the Thai Condominium Association, said rising land costs were expected to hit Bangkok condo market growth next year, with a rise of only 5% from this year.

"Good sales at new condo projects launched in the third quarter were driven by affordable prices that developers set, as those projects were based on original land costs," he said. "They were planned for launch early this year but postponed until after the political crisis."

Wason Khongchantr, managing director of Modern Property Consultant Co, said intermediate locations had become a choice for buyers who could not afford a residential unit in the inner city.

Land prices around lower Sukhumvit Road have soared to between 1.5 and 1.8 million baht a square wah, leading to condo units priced up to 400,000 baht a square metre.

"The chance for people to buy at that price will be thin if their income is stable and their debt higher," Mr Wason said.

He said there would be no more dramatic increases in land prices in the inner city after they had tripled over the past 10 years. Soaring prices will be seen in locations where new mass-transit lines are constructed under the government's infrastructure investment plan.

"It'll be a chance for the office sector to develop new office buildings in the inner city, as new supply was scarce due to the booming condo sector in recent years," Mr Wason said.

As a result of limited supply, office rents will probably rise to more than 1,000 baht per sq m in the near future from the present maximum level of 900 baht for a building on Wireless Road.