Road, rail and sea transport projects will not only improve links to Southeast Asia but also bolster development in India's neglected northeastern states.

The government of Prime Minister Narendra Modi is working full steam ahead to improve rail, road and water connectivity between India and Asean. 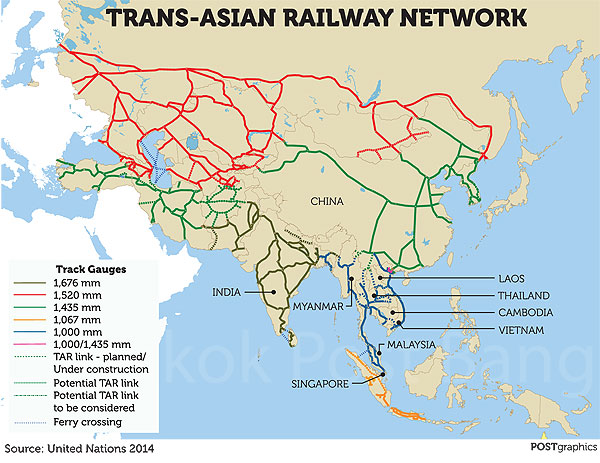 The government is pursuing plans to expand trade not only with Asean but also with South Asian countries including Bangladesh and Bhutan but also to develop its seven northeastern states in the process. The "seven sisters" — Assam, Arunachal Pradesh, Mizoram, Manipur, Meghalaya, Tripura and Nagaland — are considered India's gateway to Myanmar, Thailand and the rest of Southeast Asia.

India's Northeast Frontier Railway (NFR) has almost completed the first phase of a rail link which to Myanmar and has done an engineering survey of the second phase. It submitted the survey report on the 118-km Imphal-Moreh line to Railway Board in July this year.

The Railway Ministry is expected to approve funds for second phase of the project in its annual budget to be presented to Parliament in February. "The project will connect us to Myanmar, Singapore and other South Asian countries," said Harpal Singh, chief engineer (construction) in the NFR.

The Indo-Myanmar rail link was first announced in October 2005. Under an agreement with Myanmar's former military junta, India was to build the Jiribam-Imphal-Moreh link at a cost of 29.14 billion rupees. Myanmar was to connect Tamu, Kalay and Segyi at a cost of 13.4 billion rupees and repair an existing line from Segyi to Chaungu Myohaung at a cost of 2.84 billion rupees. India has now connected Jiribam to Tupul (84 km) and is in the process of laying a single track from Tupul to Imphal (26 km).

Besides the Imphal-Moreh-Tamu project, India and Myanmar plan to connect each other through a 257-kilometre link from Jawahar Nagar in northern Tripura state to Kolashib in northern Mizoram, and onward to Darlon in Myanmar. However, Mr Singh says this project is still at a conceptual stage. It would shorten the distance between Kolkata and Agartala from the present 1,500 kilometres to 500 km. The two railway projects would also link India's northeast with the Trans-Asian Railway Network (TAR), which has 117,000 kilometres of tracks across the vast continent. Besides connecting a major part of South Asia, the network also covers Turkey and Iran.

New Delhi is also working on a 3,200-kilometre highway that would run through the northeastern states, Myanmar and the northern Thai provinces of Chiang Mai and Chiang Rai, where it could link with roads to Laos, Cambodia and Vietnam.

The highway was to be completed by 2017 but due to difficult terrain in the Northeast, its deadline has now been extended by a year. The Indian government has committed US$100 million in credit to Myanmar for construction in the latter's territory. India hopes to start a bus service between Moreh in Manipur and Mandalay in Myanmar soon.

Meanwhile, work is progressing on a multi-modal transport project that would connect India's northeast with Myanmar via sea, a waterway and road. Essar Private Limited, the company carrying out the project, has completed around 80% of the work on Sittwe port in Myanmar. The port will be linked to Mizoram via the 158-kilometre Kalandan River, and to Kolkata via a 539-km sea route, allowing transport of goods to and from Rakhine state of Myanmar.

"Both sides see the trilateral highway as an opportunity for industrial cooperation, and sought to explore the possibility of setting up industrial parks along the highway," an Indian government spokesman said.

With Chinese companies facing stiffer public opposition to perceived bad behaviour in Myanmar, India sniffs an opportunity to cultivate Nay Pyi Taw. Myanmar is believed to have cancelled a Chinese railway proposal to connect Kunming in southern China to Kyaukpyu, a special economic zone in Rakhine state where a major Beijing-backed industrial complex is being built.

Chinese companies have not been able to deliver on a China-Myanmar gas pipeline and hydropower dam deals as well.

Apart from building road, rail and sea links with Myanmar, New Delhi is helping to set up two industrial training centres and an IT skills centre in the country.

The Modi government has given new urgency to the "Look East" policy of the Manmohan Singh government, and now refers to it as "Act East". India has signed free trade agreements (FTAs) with Asean for trade in goods, services and investment. While the goods FTA has been in existence for few years, the services agreement was signed in September this year. India and Asean hope to increase their bilateral trade from $71.7 billion in 2012 to $100 billion by next year.

To ensure that the trade gains accrue to the entire northeast region, India is working on integration. Indian Railways is working at a feverish pace to increase connectivity within the region. It has already connected Itanagar, the capital of Arunachal Pradesh, with the rest of the country and hopes to reach Shillong, the capital of Meghalaya, in the near future. All told, it has 34 projects in the region and plan to connect all seven state capitals by 2020.

The Asean Economic Community (AEC), meanwhile, will become a reality next year, and a year later Asean-India will embark on a five-year plan to enhance people-to-people contacts and improve trade, strategic and political relationships.

SURAT THANI: More than 200,000 tourists, mostly foreigners, visited Koh Tao, a popular attraction in this southern province, over the past nine months.